An action-platformer for browsers, made by VVVVVV's Terry Cavanagh. It is based on the myth of Orpheus.

Don't Look Back is a Flash-based game by Terry Cavanagh, best known as the creator of VVVVVV and Super Hexagon.

The game is a 2D action-platformer similar to Mega Man, in which he player moves from screen to screen shooting monsters and circumventing various obstacles, with a few boss fights along the way.

The game is based on the tale of Orpheus and his wife Eurydice in Greek myth. In the story, Eurydice dies and Orpheus ventures into the underworld, convincing Hades to let her return to the world of the living. However, Hades stipulates that Orpheus cannot look at Eurydice until they have both left the underworld. Just as Orpheus emerges from the underworld, he glances back at Eurydice, who has not yet passed through the entrance, and she is cast back into Hades' realm for good. 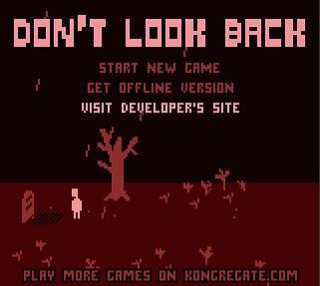