Rush Bros is a music-generated platform racing game that features both single player and competitive multiplayer modes that can be played via split-screen local or online between two simultaneous racers.

The player plays as one of two DJ brothers racing to get to the end of the level the quickest. The game has multiple levels that change and pulse to in-game tracks, but players can also import their own music libraries to play along with. 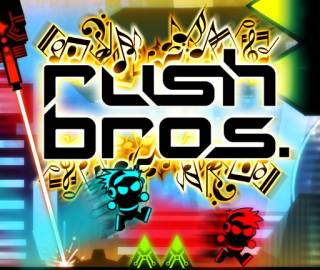