An action RPG developed and published by SunSoft for the Famicom Disk System. It was originally developed by System Sacom for the PC98.

Marchen Veil (or Märchen Veil, "märchen" meaning fairytale in German) is a top-down action RPG adventure game that originally came out in 1985 for the NEC PC-9801, preceding its clear influence The Legend of Zelda by a few months. The game was renowned for PC-9801 owners for its sharp graphics and storybook style narrative device, in which each chapter of the game is presented in a "visual stage" that sets the scene for the world ahead.

The game was eventually ported in 1987 to the Famicom Disk System by the original game's publishers SunSoft. Though slightly dated by that time, the game retains many of the same features as the original.

The player controls a character who awakens in a strange land as a satyr, a half-goat half-human creature. The goal of the game is to help this protagonist, a prince, find his way home. The player can roam around the top-down areas of the game, firing projectiles at enemies to defeat them, and negotiating mazes to find the exit. After each stage, a new visual stage tells more of the story. 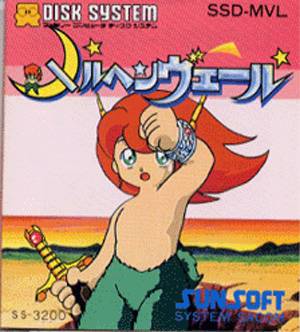