A puzzle game developed in-house by Nintendo and Indieszero that stars a drinking bird toy able to drain and redistribute colored fluids.

Sutte Hakkun is a first-party puzzle game released for the Super Famicom in Japan late in the system's lifespan. The game was partially developed by indies zero, and was their first ever project. The studio would later go on to create the NES Remix series for Nintendo.

In the game, the player directs the eponymous bird as it uses its long beak to draw fluids from colored objects and paint pots, and then use that fluid to fill in transparent objects in the environment. Depending on the color used to fill them in, the objects will behave differently. Sutte can also absorb and re-place the transparent objects themselves, with some restrictions. The goal is to collect all the rainbow shards on the level, each of which requires some effort to reach. 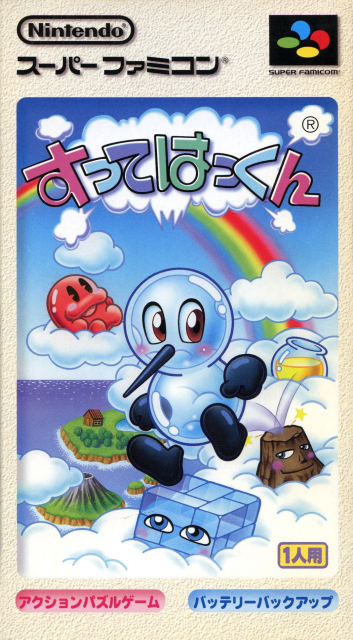