Mario Kart 8 introduces gravity-based track design with vertical surfaces and upside down roads for the usual band of racers to drive on via magnetic wheels. Another new feature is Mario Kart TV which automatically creates a highlight reel of each race for users to share with their friends on Miiverse or YouTube. The Community features introduced in Mario Kart 7 make a return, letting players set up tournaments and group races with an expanded set of custom rules. Up to 12 players are able to compete in the game's online mode, including two local players using the same console. There is also local support for up to four player splitscreen races.

After finishing a race, players are shown an auto-generated clip of highlights from that race. This clip can be edited and shared online via Miiverse and/or uploaded to the user's own YouTube account (in 720p). Players can determine various parameters for the clips such as clip length (30 seconds, one minute, or the entire race), which character the camera follows, and specific race events to showcase such as stunts, item usage, or last minute victories. Slow motion effects can be applied during the editing process. The game stores the last 12 full races which can then be edited and shared at the player's discretion. Mario Kart TV also records Battle Mode matches.

The biggest new gameplay feature of Mario Kart 8 is the anti-gravity mechanic which lets players race on the walls or ceiling in certain areas. During these anti-gravity sections, lightweight racers can run into heavyweights and benefit from a speed boost instead of spinning out and grinding to a complete halt. "Spin Boosts" can be used by all racers and can even chained together. Underwater and hang-glider sections both are again heavily featured in Mario Kart 8.

In terms of vehicles, karts and bikes make a return with ATVs (referred to as quads in Europe) jumping into the mix this time as a compromise between the former. Bikes better retain their speed in curves while karts have an advantage on straight passages. The bikes have lost their ability to do wheelies in this game, however. Players can again fully customize their vehicles by choosing various parts like in Mario Kart 7.

Racers can now only ever hold a single item and no longer "bank" one by activating but not releasing it and driving over another item box.Only after the item has been fully exhausted can another one be collected. Coins also return and collecting them increases the racers speed for every additional coin collected (up to ten).

The traditional Mario Kart Grand Prix against 11 other racers. This mode features the traditional 50cc, 100cc, 150cc difficulty levels and Mirror Mode. With an update that was released on April 23, 2015, a new 200 cc difficulty was added to the game as well.

In the traditional time trial fashion, players can set personal records and race against their ghost driver and upload that ghost driver online. Special staff ghost data can be downloaded and upon beating said staff ghost, a special Miiverse stamp is awarded.

For the first time ever, the game's Grand Prix mode can be played by up to four players simultaneously via splitscreen. A full set of 12 racers with a maximum of four human players.

Mario Kart 8 again features online races for up to 12 players with the option for two local players playing from the same console, like in Mario Kart Wii. Similar to the previous game, race rules can be customized to allow only specific items or no items at all, for example. The online mode allows for worldwide, regional or friend-only races. Voice chat makes its Mario Kart debut and lets players talk to each other in friends-only lobbies (not during gameplay).

In keeping tradition with previous online entries in the Mario Kart series, MK8 again features a VS Rating (VR in short) keeping track of a player's wins and losses against their opponents in online races. VR stats are kept separately for Grand Prix and Battle Mode. New in Mario Kart 8 is the support for VR tracking for multiple users. If a second player is logged into their Nintendo Network ID which has a Mario Kart 8 save tied to it with online data (must have completed at least one online race on the NNID) that player's VR rating will also be tracked when playing as a second player on another user's save file.

In addition to those, there is a dedicated Tournament Mode in which players can even launch custom tournaments. Players can create custom tournaments and specify time and date, item rules (such as "no items" or "frantic mode" which increases the chance to receive rare items), win conditions, teams, speed class, control options, CPU players, skill rank requirements, vehicles types and more. Tournaments can be public or limited to friends and they can also be set up to be recurring on daily, weekly, monthly cycles.

The Battle Mode in Mario Kart 8 is mechanically based on the classic mode from Super Mario Kart and Mario Kart 64 in which it's all about destroying the other player's balloons in arenas. If a player manages to lose all three of their balloons, they now respawn as a ghost version and can still interfere in the match. However, a ghost player can no longer win. Battle Mode can be heavily customized to determine game length, courses, CPU opponents and various other variables.

Notable is that the courses in Battle Mode are not totally separate arenas but instead altered versions of courses from Grand Prix Mode.

Characters are yet again split into three tiers of light, medium and heavy weight classes which affect acceleration, top speed and other driving properties which will affect the performance in combination with the vehicle selection of the player. When choosing Mii characters, their class depends on the weight that was associated with that character during its creation process in the Mii Maker.

As part of a free update, Nintendo released a set of Mercedes-Benz themed karts on August 27, 2014. The three karts are designed after the Silver Arrow, 300 SL Roadster and Mercedes-Benz GLA for a cross-promotion with Mercedes-Benz that also includes a GLA commercial featuring an actor in a Mario costume driving a GLA, getting out of the car and looking angrily at a CGI-Goomba. The DLC karts also change color depending on the driver selected, just like the regular karts.

The first paid-for DLC marks the very first Nintendo franchise crossover in the Mario Kart universe by introducing a playable Link from The Legend of Zelda-series as a driver and an Epona-inspired bike called Master Cycle. On Hyrule Circuit, coins are replaced by rupees and triggering three specific boost poles in a row will temporarily reveal a shortcut accompanied by a classic chime. In addition, this DLC pack also features the Blue Falcon from the F-Zero franchise as well as an Mute City course that doesn't have any coins but players instead fill their coin count by driving over the power strips, like in the actual F-Zero games. Excitebike is represented as well with Excitebike Arena, a very basic oval track similar to Mario Kart Double Dash's Baby Park. Notably, the location of ramps and speed boosts change every race, except when playing in Time Trial mode.

The second DLC pack introduces another franchise crossover. This time with Animal Crossing in the form of the Villager and Isabelle. In addition to an Animal Crossing track that randomly changes its seasons every time it is played (and features coins made to look like Bells, the currency in the Animal Crossing series), a second track based on F-Zero makes an appearance. Big Blue is a point-to-point race like Mount Wario from the main game and features the same F-Zero series-gimmick of using power strips to gather coins instead of having them appear as physical pick-ups on the track itself.

The second pack was released on April 23, 2015 while originally being planned for May.

As a bonus for purchasing both packs either as a bundle or separately, players will receive eight different-colored Yoshis and eight different-colored Shy Guys that can be used right away. Purchasing both packs upfront will also be offered at reduced cost and, notable, leaves the door open for cancellation of the pre-order until the first pack is released.

So far two updates for the game have been released which have had a significant effect on the gameplay though the addition of new features and enhancement of already existing features within the game.

The first update to version 2.0 of the game was released on August 27th 2014 and introduced the following main changes to the game.

The second update to version 3.0 of the game occurred on November 13th 2014 and included the following:

The third update to version 3.0 of the game was released on April 23, 2015 and included the following:

Version 4.1 was released on May 1st, 2015 and allows players to select Mirror Mode and 200cc in Grand Prix mode without having to unlock them.

To coincide with the release of the amiibo figurines an update was released for the game adding amiibo functionality to the game. The update provides 10 unlockable Mii racing suits (as both Link and Toon Link unlock the same costume) corresponding to the various amiibo figures compatible with the game which players may use to dress their Mii's whilst racing. In addition to those initial 10, an update was later released alongside the second DLC pack that added another 9 amiibo costumes for players to choose from.

The list of currently compatible figures is as follows:

Mario Kart 8 Deluxe is an updated version of Wii U's Mario Kart 8. Deluxe includes all of the DLC that was released on the Wii U version and adds new characters, maps and modes. The new characters are the Squid Sisters, King Boo, Dry Bones & Bowser Jr. New content include Balloon Battle & Bob-omb Blast, new items and the ability to hold two items at anyone time. Unlike the original release Deluxe offers eight player local wireless multiplayer.

Nintendo is launching a couple of customer reward promotions alongside the launch of Mario Kart 8 across all territories, all with minor differences.

Nintendo of Europe also offers a Limited Edition of the game that comes in a big box with a Spiny Shell figurine. A special offer in Nintendo UK's web shop adds a Mario Kart-themed T-Shirt and keychain to the Limited and Standard Edition for £59.99 and £49.99 respectively. Additionally, they split the console bundle into a Team Mario and Team Luigi offer that includes a Mario or Luigi hat, a Mario or Luigi Wii Remote Plus, a Mario or Luigi-themed Wii U GamePad protector and a physical copy of the Mario Kart 8 Game Guide from Prima for £299.99.

In Europe, players who purchase Super Mario Kart on the Wii U Virtual Console will receive a £5.49/€7.99 discount if they proceed to buy Mario Kart 8 on the Nintendo eShop before June 30, 2014.

Finally, Nintendo announced a Free Bonus Game offer for Club Nintendo members via a Mario Kart 8-focused Nintendo Direct on April 30, 2014. Players who buy Mario Kart 8 either at retail or on the Wii U eShop and register their game on Club Nintendo until July 31, 2014 will be able to choose between various Wii U games and receive a free eShop download code for their game of choice. In Japan, the promotion entitles players to pick two out of six games (full versions with a timer) which they can play for an entire month for free in addition to getting the chance to buy each for 40% off during the trial period.

On top of being the best-reviewed Mario Kart game in franchise history, Mario Kart 8 also managed to snatch up the title of fastest-selling Wii U game and having the second best franchise launch in the UK. The game managed to sell 1.2 million copies worldwide within the first three days on the market, according to a press release by Nintendo. As of September 30, 2016, Mario Kart 8 has sold 8 million copies globally. 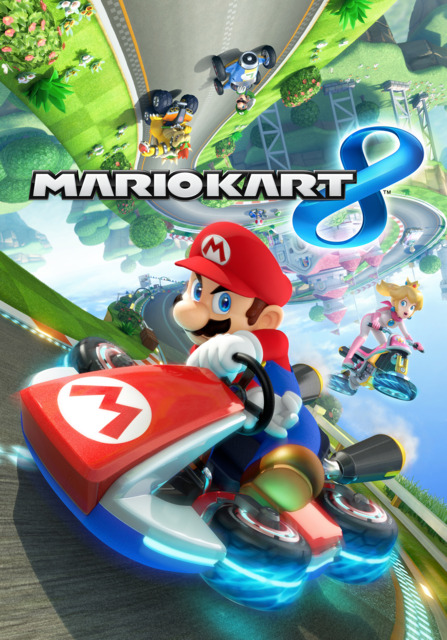