A fantasy non-linear puzzle/platformer with RPG elements developed by Athena. The hero Lutter must save six damsels from a diabolical maze.

Lutter is a platformer comprised of single screens full of traps, obstacles, enemies and items that the eponymous hero Lutter must navigate in order to find six missing damsels and the enormous monsters that hold them hostage. The game has some element of non-linearity, as there are numerous paths that split off to explore. The chief goal is to find keys that unlock doors to new areas and eventually to large, screen-sized bosses that Lutter must defeat in shoot 'em up style boss fights.

The game also features a few RPG aspects: Lutter has a health bar and can level up, which increases his health and other stats. He defeats enemies by charging into them, similarly to early action RPGs like the first Ys and Hydlide. When defeated, the game will automatically try to bribe the victorious monster with whatever funds the player has accrued: should they have enough to placate the monster (this amount often depends on the strength of the monster) Lutter reappears where he entered the screen with his health restored.

Lutter was developed for the Famicom Disk System towards the end of that peripheral's lifespan. As such, it is part of a large group of games that were only available from a Disk Writer service that allowed consumers to rewrite blank Famicom disks with budget-priced games at kiosks found at participating retailers. 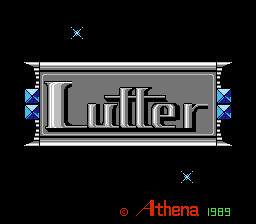