A superhero-themed auto-scrolling action game from NEC Interchannel. It is based on the anime of the same name.

Genji Tsuushin Agedama is a side-scrolling "run and gun" action game released exclusively on the PC Engine (the Japanese TurboGrafx-16). It stars the eponymous Genji Agedama, a regular student that is transformed into a costumed super hero whenever the need arises. The game is based on the anime of the same name, which was actually a goofy lampoon of tokusatsu TV shows not unlike Samurai Pizza Cats and other animated superhero shows with that sensibility.

Genji Tsuushin Agedama automatically scrolls to the right in every stage (with a few exceptions) and the player character is constantly running to keep up. Enemies show up along this path, often appearing in shoot 'em up type waves, and the player can either shoot them down with their qi-blast projectile attacks or avoid them. Occasionally, the player will also be required to jump from platform to platform.

The player has a health bar measured in red magatamas - the player initially starts with eight and can occasionally find additional ones after defeating enemies. The player can also collect blue magatamas: this makes an "option" character show up and help Agedama for a while, providing services like increasing his firepower or creating a shield around him. The player can also find rare yellow magatamas which temporarily make him invincible.

In addition to the magatamas the player can find and collect five different-colored orbs that allow Agedama to charge up (by holding down the attack button) and release a special attack. These colored orbs are as follows:

It is also possible to charge the gauge insufficiently to reach one of the orbs, in which case a lesser form of that attack is performed. For instance, holding the charge and releasing just before reaching the purple orb creates a smaller genie that homes in on enemies. Each special attack has their own lesser form. 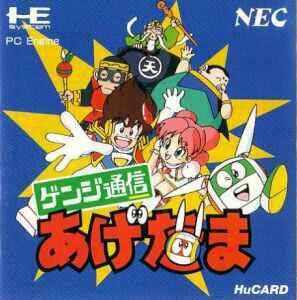