By Desunoya, this is the sequel to MariAri. In this doujin game Marisa and Alice are trapped inside a tower full of traps, and the player must control both characters alternately to navigate them through the puzzles. Co-operative play is also available.

Desunoya's sequel to the puzzle game MariAri, it takes a different direction from the original. Instead of controlling the environment while Marisa walks through the level, in this game the player controls both Marisa and Alice attempting to climb a tower, by manipulating objects that raise and lower the tower height. Co-op play is possible via an official patch, which also adds additional levels. 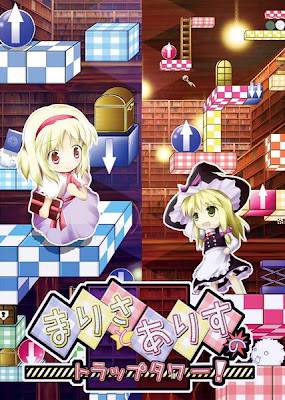