In the edutainment game Globetrotter, you play as a backpacker traveling around the world while taking pictures of famous locations and earning money through testing your knowledge of different subjects.

In Globetrotter, you play as a man or woman, who has just become a member of The Globetrotter Club, and, in order to be promoted and advance in 'membership rank' and eventually become President of the club, has to travel around the world in order to photograph specific locations.

Travelling costs money, which can be earned in-game by taking on jobs, which consist of quizzes related to the subject (i.e. if you take a job as a gardener, you get questions related to botany).
You can also spend money on helper objects such as city maps, newspapers, energizing gum and, of course, film reels for your camera.

There are four main ways of travelling across the continents: boat, bus, train and airplan. Each have their pros and cons, e.g. the bus is the cheapest, but your character will be tired once he reaches his location, while the airplane is the most expensive, but also the fastest and your character gets his sleep.

When your character travels at night, he cannot replenish his energy by any other way than sleeping at a hotel. Furthermore, he is prone to attacks by robbers, who will take half of his money. 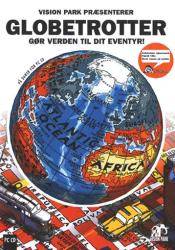