A pool simulation game by Naxat Soft for the PC Engine. It remained a Japanese exclusive until 2008 when it was released on Wii's Virtual Console in the US, Europe and Australia.

Break In is a pool simulator for the PC Engine that was developed and published by Naxat Soft. The game allows for multiple human players (up to four) and has six different modes, including 8-ball, 9-ball, Rotation and Bowlliards variations among others. The player can either play against a CPU opponent, a human opponent or play a single-player story mode in which they have to beat 14 NPCs of increasing difficulty. There is also a challenge mode for trick shots and other difficult pots.

Break In was released in Japan exclusively for the PC Engine in 1989. In 2008, the game was finally made available to other regions via the Wii's Virtual Console. The Virtual Console version extends the number of human players possible to six. 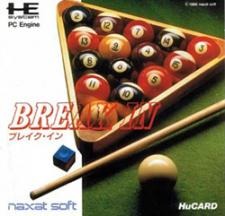