Will: The Death Trap II

Will: The Death Trap II is a video game developed and published by Squaresoft in 1985, for the NEC PC-8801, NEC PC-9801, Fujitsu FM-7 and Sharp X1 computers. Developed by Hironobu Sakaguchi, the game was a technical milestone for its real-time animated cutscenes, rendered using animated bitmap graphics, as well as its soundtrack by Nobuo Uematsu.

Will is the sequel to The Death Trap, and was Squaresoft's second release. Written and designed by Hironobu Sakaguchi, it is the second part of the Death Trap trilogy.

Will was released exclusively in Japan, where it sold more than 100,000 copies, making it a major commercial success for a computer game at the time of its release. The game's success, along with that of its successor Alpha, paved the way for Squaresoft's later success with the Final Fantasy series.

Much like its predecessor, Will is an interactive fiction game, which relies on simple command lines from the user's input to progress through the game. As in the previous game, the locations are represented by graphical images, but the interaction is performed by typing commands. A new addition is that it is now possible to move between locations using the directional keys. The paper map of the first game is also replaced by an automap radar.

As opposed to earlier text adventures, with only text as output, Will provides graphical feedback by using screenshots. Squaresoft recruited a postgraduate student from Keio University to program the animated bitmap graphics of Will. Squaresoft utilized this new animated bitmap graphics technique (predating the GIF animated bitmap format by two years) to render the first real-time animated cutscenes, making it a technical breakthrough at the time. This is apparent in the introduction sequence, where the female character Aisha is blinking.

The use of animated cutscenes, in the form of animated bitmap graphics, would later be used in many other 2D video games, including its spiritual successor Alpha, other adventure games like Snatcher, platformers like Valis and the original Ninja Gaiden trilogy, and RPG's like the Ys and Far East of Eden series.

This was one of the first games to utilize the PC-8801's Yamaha FM synthesis sound board. To compose the chiptune music for this game, Squaresoft hired Nobuo Uematsu, for what would be his debut soundtrack, which was impressive enough to have its own original soundtrack release. The game also introduced the use of ambient sound effects, to heighten the game's atmosphere.

Like its predecessor, The Death Trap, Will features a Cold War era, proto-Metal-Gear, storyline. In contrast to the first game, the sequel has a science-fiction storyline, making this game somewhat more like Metal Gear than its predecessor.

The game begins with the President of the United States of America receiving a letter with simple, but chilling words: within the next twenty-four hours, all life on Earth will be annihilated. Specialists track the sender of the letter to a small island named Torinia somewhere in the Pacific Ocean. Special agent Benson is once again called into action, and is sent there with the ultimate mission: find out who sent the letter, or prepare for the destruction of the world. While at the island, he meets a mysterious woman named Aisha. 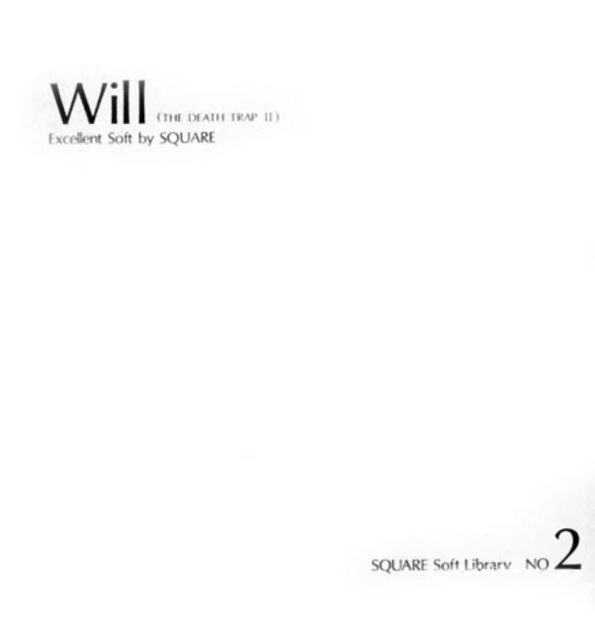