This is the second of a two-part series, followed by Kidou Senshi Gundam Part 1: Gundam Daishi ni Tatsu in 1983. Part 2 is based on episodes 4-12 of the Mobile Suit Gundam television series. Like its predecessor, it referred to itself as a "ROLE-VENTURE" game, combining elements from the adventure, visual novel, RPG and shooter genres.

While the first game was mostly an adventure with some RPG and shooter elements, this sequel delves further into RPG and shooter territory, adding several features that anticipate the later FPS (first-person shooter) and TPS (third-person shooter) genres. The early shooting segments resemble a first-person space flight simulator, with the player aiming, locking-on and shooting at enemy targets. In later shooting segments, it changes into something approaching an FPS or TPS, with the player mech navigating around a maze-like city and shooting at enemies, with the camera occasionally changing between a first-person view and a behind-the-mech, third-person view. However, due to the use of a text-based interface, the action was slow-paced. Nevertheless, this was a precursor of things to come in the more fast-paced, first-person shooter, Z Gundam: Hot Scramble, released for the NES in 1986. 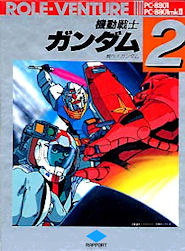