The first Super Turrican was developed for the NES by series creator Manfred Trenz alone. It is based roughly on the levels of the first two Turrican games, which had not been previously released on the NES, combining them into one game. The game was never released outside Europe.

Super Turrican is a platforming action game developed by Rainbow Arts Software and published by Imagineer Co. for the NES platform. 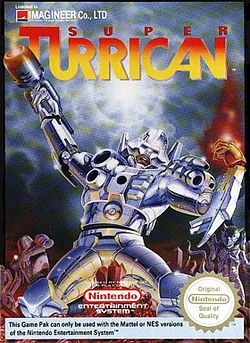