A 1990 JRPG for NES. The game is a Hindu-themed RPG about a hero that is on the path to becoming a Dragoon.

Sansara Naga is a Famicom RPG released in 1990 and the first game in the Sansara Naga series. It was later followed by a 1994 sequel for the Super Famicom, Sansara Naga 2, and then both it and its sequel were packed together for the 2001 GBA compilation Sansara Naga 1x2.

The game is set in India and its story contains elements of both Indian and Japanese folklore and features a protagonist looking to restore their lost honor by becoming a powerful Dragoon, accompanied by their own dragon. One goal of the game therefore is to raise a dragon which will fight alongside the player character and will increase in strength after eating the remains of enemies; the player character, conversely, does not increase in level and must rely more and more on the strength of their companion. 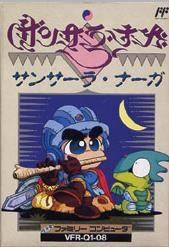