Designed by Yoshio Kiya and released by Nihon Falcom in 1983, this was possibly the first action RPG. It introduced real-time combat, sci-fi elements, a persistent open world with day-night cycle, and survival mechanics. This was a precursor to Falcom's seminal action RPG franchise, Dragon Slayer.

The game was designed by Yoshio Kiya, whose innovative ideas about RPG design departed significantly from the turn-based norm at the time. In 1984, he would go on to create Nihon Falcom's Dragon Slayer franchise, which laid the foundations for the real-time, action RPG genre.

The game had several RPG mechanics, such as hit points and stamina statistics, equipping weapons and armor, finding and winning gold in battles, and purchasing items from stores in towns.

The camera perspective switches between a top-down view for the overworld and towns, and a first-person view inside buildings (such as inns) and dungeons.

Panorama Toh introduced several innovations that significantly departed from other RPG's at the time. It has a real-time, persistent open world, with a day-night cycle. The screen becomes darker at night, but the player is unable to move during that time (presumably because the player character is resting).

The game introduced survival mechanics. The player can die of hunger or fatigue, represented in the form of hit points and stamina statistics. The stamina decreases with every action taken, but can be replenished with (F)ood or rations. Certain kinds of food can only be found above trees, which need to be climbed using a rope. The game also features a flashlight, necessary to brighten dark dungeons, and batteries are needed to power the flashlight.

The player can interact with non-hostile, NPC's (Non-Player Characters), usually tribal bushmen, in several ways: (T)alk to them, (A)ttack them, or (G)ive them money (some NPC's might give something in return or run off with the money). Traps also occasionally appear, where the player can either attempt to (J)ump out of the trap themselves or (C)all for help for some NPC to come and help out. The player may also occasionally get bit by snakes, which can lead to paralysis and needs medicine to cure.

The game also came with a manual explaining the plot, in Japanese writing, much of which was philosophical.

The game's biggest innovation is the introduction of real-time combat. In addition, instead of a sword, the player character's main weapon is a gun. 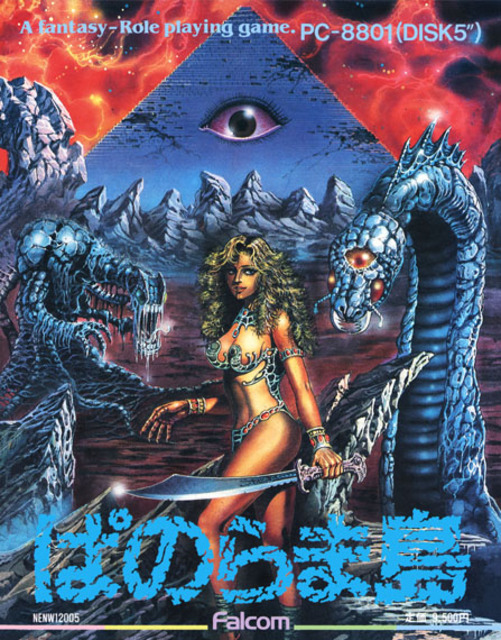