The tenth installment of the bloody and storied fighting game franchise picks up decades after the events of the 2011 franchise re-boot, as new and returning kombatants fight throughout the realms over the power of an imprisoned evil.

Mortal Kombat X (pronounced with the letter "X") is a 2.5D fighting game developed by NetherRealm and published by WB for the Xbox One, PlayStation 4, and PC (via Steam, ported by High Voltage) on April 14, 2015.

The tenth main entry in the long-running Mortal Kombat franchise, Mortal Kombat X is the first installment to be released for the eighth generation of gaming consoles. Building off its predecessor (2011's Mortal Kombat), the game adds a variety of new gameplay mechanics, including the ability to directly interact with the environment (straight from Injustice: Gods Among Us), multiple variations for all playable characters (each with unique abilities), and a new set of bonus finishing moves (including a variation of Brutality from Ultimate Mortal Kombat 3, which now serves as a hidden brutal enhancement of the character's final attack). Also returning from UMK3 is the ability to quickly run forward (complete with a regenerating "sprint gauge").

The main single-player story takes place over 20 years after the events of the previous game (continuing the plot's "alternate timeline" where thunder god Raiden's visions from the original timeline influences key changes in the plot). A few years after the destruction of Shao Kahn, wicked Elder God Shinnok (with the help of sorceror Quan Chi) had invaded Earthrealm with the forces of the Netherrealm, only to be imprisoned (after a defeat by Johnny Cage) in his amulet. When the power of the amulet is later used by Mileena during a civil war in Outworld (between her Tarkatan army and the forces of emperor Kotal Kahn), it's up to a new Special Forces team of fighters (Cassie Cage, Jacqui Briggs, Takahashi Takeda, and Kung Jin) to recover the amulet before it falls into the wrong hands.

Ports for the Xbox 360 and PlayStation 3 (both also by High Voltage) were delayed several times, before being finally announced to have been canceled on August 28, 2015. The Xbox One and PlayStation 4 versions received a re-release, titled Mortal Kombat XL, on January 20, 2016. The re-release includes all previous patches and downloadable content, as well as the Kombat Pack 2 DLC.

While the bulk of the story takes place in a set time frame (over 20 years after the events of the previous entry), part of the story is told in flashbacks. Like Mortal Kombat vs. DC Universe, Injustice: Gods Among Us, and the game's previous entry, the game is separated into multiple chapters (with each chapter focused on one of the playable characters, who is the player-controlled character in its fights).

The game begins with the revelation that the events of the previous game was manipulated from behind the scenes by fallen Elder God Shinnok, who millennia ago attempted to conquer the EarthRealm but was defeated by Raiden and imprisoned him in the NetherRealm.

In the present day, 2 years after the defeat of Shao Kahn, NetherRealm forces comprised of demons have begun invading the EarthRealm. An armed squadron of choppers including Johnny Cage, Sonya Blade and Kenshi are heading towards a portal that will allow them access to a white lotus sky temple. Their mission is to protect EarthRealm's life force, the Jinsei, which Shinnok is attempting to corrupt.

The choppers are attacked by Scorpion and an undead Sub-Zero (Kuai Liang), the latter having had his conversion to Cyber Sub-Zero reversed by the same magic that made him an undead warrior. After an initial skirmish which sees all the soldiers on the chopper murdered Kenshi telekinetically throws Sub-Zero from the chopper while Sonya attempts to land it. Johnny battles with Scorpion and then Sub-Zero on the ground, joining up with the others and the remaining choppers and surviving soldiers.

At Raiden's sky temple, Shaolin Monks led by god of thunder Raiden and god of wind Fujin, are attempting to fend off an army of demons led by Shinnok himself, his sorcerer Quan Chi and undead warriors including Jax, Enenra ("Smoke is dead, I am Enenra."), Nightwolf, Sindel (seemingly minus the essence of Shang Tsung), Stryker and Kabal.

Sonya's forces arrive outside the temple and do battle with the demons. After Johnny battles the former Smoke and Jax their forces infiltrate the temple to find Raiden. Meanwhile Shinnok reveals himself to Raiden and Fujin boasting of his power to bring the dead back to life as undead warriors. Raiden and Fujin defeat Sindel, Kabal and Stryker but are attacked by Shinnok who uses his powerful gold and green amulet. On the blink of defeat, Johnny, Sonya and Kenshi arrive just in time to prevent the two gods from being sealed away inside Shinnok's amulet, knocking the amulet to the ground. Shinnok incapacitates Kenshi and Sonya, but is unable to finish off Johnny, who's green power counters Shinnok's own dark power. Johnny kicks the amulet to Raiden who seals away Shinnok inside his own amulet.

20 years later, as Johnny Cage has finished retelling this story (also including the fact that Raiden told him his green power comes from a line of supernatural Mediterranean EarthRealm warriors) to a new team comprised of Cassie Cage, Jacqui Briggs, Takahashi Takeda and Kung Jin, he sends them on a mission to locate Sub-Zero and the Lin Kuei to reaffirm their allegiance to EarthRealm.

Mortal Kombat X builds off of the systems created for the previous Mortal Kombat, utilizing the same button layout and attack format of Front and Back attacks for both fists and feet. Each character has a three-segment super meter that allows for enhanced versions of special moves, combo breakers, and an ultra-damaging X-Ray move. Unlike the previous game, MKX allows players to run by double-tapping and holding toward their opponent. Similar to Mortal Kombat 3, a meter governs just how much a player can run.

During fights, players can hit a button (R1 on PS4, RB on Xbox One) to interact with various background elements. This includes posts that can be launched off of to get away from (or closer to) an opponent, objects that can be thrown as weapons, and so on. Unlike the similar system from Injustice, all characters will interact with objects in the same way.

At the end of each fight, a finishing move, such as a fatality or a brutality, can be performed. Fatalities will be accessible at the end of a fight after the iconic announcer line "Finish Him/Her!" Brutalities in MKX are extended versions of attacks, special moves and throws that continue the animation of said attack, special or throw into a gruesome non-cinematic end for the opponent. There are said to be over 200 brutalities in the game and each has its own conditions players must satisfy during a fight to use them at the end.

Each character will have three different variants that offer different options and moves. These fighting styles are chosen on the character select screen and aren't swappable during a fight. As an example, this allows players to give Scorpion a fireball attack in one form or choose another that allows him to create and launch demonic clones of himself at his foes.

This is done to create different versions of a character that can serve different purposes, such as one version that's good for zoning and another that's focused more on rushdown tactics.

The game will have a story mode as well as a new set of challenge towers. Unlike the set, offline tower found in Mortal Kombat, MKX has three towers of varying length that update at different intervals, giving players new types of challenges each day. Currency is earned in some modes, but it's unknown if this ties into a "krypt" or other sort of process for unlocking additional material.

Online modes include standard battles that can be played in a ranked or unranked fashion, a king of the hill mode, team battles, and so on. Some modes can be played in a faction-specific configuration to tie into the Faction War metagame.

Mortal Kombat X has a fully connected experience with a persistent online metagame called the Faction War. Players will choose one of five factions and actions they perform while playing will contribute to their faction of choice. The leading faction is crowned the winner, and points are reset every week to constantly determine new winners. Players in a winning faction will earn bonuses, some of which may only be active while that faction is the most recent winner.

The game's initial roster includes 24 fighters, both returning and new. Given the decades-long span covered by the game's storyline, many returning characters are aged.

Rumors regarding a new Mortal Kombat were confirmed by series co-creator Ed Boon after a cryptic countdown via his Twitter account, leading to June 2, 2014. The game was officially unveiled that day along with a CG trailer by Digital Dimensions featuring an original track titled "Can't Be Stopped" by rapper Wiz Khalifa.

The game runs on a vastly updated version of the same Unreal Engine 3-based technology, reformulated for use on the next generation of consoles. 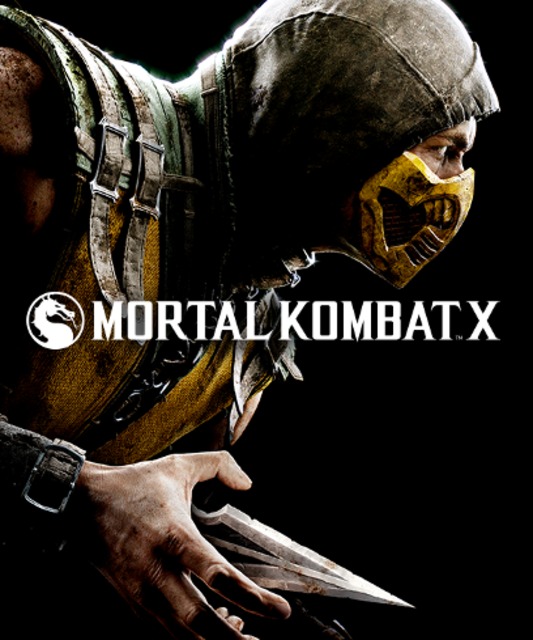