A pizza-themed Famicom platformer game from Arc System Works and Jaleco. It was never released outside of Japan.

Pizza Pop! is a platformer in which the protagonist must deliver pizzas to various dangerous locations in order to make enough money to buy his girlfriend an engagement ring. He is thwarted by many enemies, including his romantic rival who appears frequently to take him down. Points are scored at the end of each stage based on completing stages quickly, defeating enemies and recovering extra pizzas.

Pizza Pop! was developed by Arc System Works, and is one of their earliest original IPs. It was published by Jaleco in Japan only. 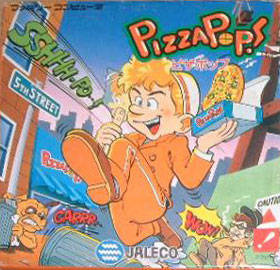