The direct sequel to Ys: Ancient Ys Vanished developed by Falcom and released on a number of platforms.

Ys II is the second installment in Nihon Falcom’s long-running series of action RPGs. The original Ys was planned to be much longer but due to limited time and space the game was split in half with Ys II finishing the story that was initially intended. Advertisements boasted how the game's data was four times as large as the previous game and contained new mechanics such as series protagonist Adol Christian now being able to use magic. The title was initially released on April 22, 1988 for the NEC PC-88 before being ported to a number of other computer platforms. A Famicom port was also released in 1990 by Victor Interactive and the title was remade several times over the years, often included with Ys I in compilations. 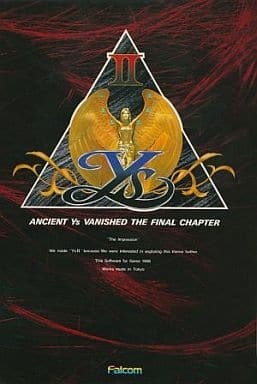