A Super Famicom RPG set in a version of feudal Japan. It was developed by TOSE and published by Intec.

Yume Maboroshi no Gotoku ("Like a Dream", roughly) is an RPG set in a version of Sengoku era Japan. it is based on a manga of the same name by Hiroshi Motomiya (best known for Salaryman Kintaro) and follows an alternative retelling of the Sengoku era in which legendary warlord Oda Nobunaga survived his supposed historical death.

It plays like a standard JRPG, with a turn-based system that uses large enemy sprites in the center of the screen a la Phantasy Star or Dragon Quest.

The game was one of two games ever published by Intec for the Super Famicom. They usually worked with the TurboCD/PCE-CD system. The game was never localized into English or released outside of Japan. 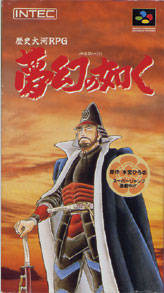