A shareware mahjong solitaire game for Windows PCs. Originally released in 1997, it received numerous updates dating all the way to 2006, adding new layouts, tilesets, music, game modes, and 3D rendering. It was sometimes sold in retail as Mahjongg Master.

Kyodai Mahjongg (also known as Kyōdai MahJongg, or simply as Kyodai) is an indie mahjong solitaire game developed and released by René-Gilles Deberdt (sometimes under the pseudonym "Naoki Haga", later as "Cyna Games") for Windows PCs on March 4, 1997. Originally a freeware game, it was later distributed as nagware.

A standard mahjong solitaire game of the era, Kyodai Mahjongg received regular updates for nearly a decade since its release, with the last update on September 5, 2006 ("KMJ 2006 v1.42").

There have been 20 major numbered revisions in total, each adding new content, features, and quality-of-life updates. Along with new music (MIDI, tracker, and digital audio), layouts, tilesets, and backgrounds, the game received new bonus game modes (such as nikakudori mahjong solitaire, concentration, and variations on other puzzle games), online multiplayer, multi-language support, and full 3D rendering.

The game was later sold by RomTech (later eGames) in retail multiple times under the title MahJongg Master. Originally sold as part of their "Game Master" brand, there were six yearly retail releases (from the original in 1998 to MahJongg Master 6 in 2004). These versions include additional backgrounds, tilesets, and tile layouts (with the sixth entry boasting over 300 layouts, over 400 tilesets, and over 1700 backgrounds).

The game originally included one mode (Solitaire), with additional ones added over time.

These modes make use of a set of standard rectangular tiles, 40 types in all.

Standard mahjong solitaire. Players are given a multi-layer formation of tiles (with up to 144 tiles, 4 copies of 34 tiles and 1 copy of 8 "season and flower" tiles) and attempt to remove all tiles by matching pairs of "open tiles" (which have no tile above it and is unobstructed in one of its longer sides), with the four "season" tiles matching each other and the four "flower" tiles matching each other.

The game was originally distributed with one layout ("Traditional", based on the classic Shanghai layout), with new ones added over time. The last version of the game included a total of 100 layouts, many of which are from fans. Players can also build their own custom layouts.

Nikakudori mahjong solitaire. Players are given an unstacked 12×6 rectangular formation of tiles and, rather than "open tiles", can only remove tiles if they follow the rule of "nikakudori" (or "two-angle take", in which a path of 1-3 orthogonal lines must be imagined between the tiles so that no line touches any other tile).

While the Easy variation plays normally, the Hard variation of this mode adds a second layer beneath the standard formation, which is a separate puzzle that is normally obstructed by the first layer.

Based on Concentration. Players are given an unstacked rectangular formation of tiles that are normally hidden. All tiles are considered "open tiles", and temporarily reveal themselves by attempting to match two hidden tiles. Rather than the standard tile distribution, it uses two copies of each of the 42 tiles.

These modes are based on other types of puzzle games and make use of a separate set of squared tiles, 8 types in all.

Based on SameGame. Players are given a random 18×12 formation of multiple types of stones and attempt to clear as much of the board as they can by selecting groups of two-or-more stones of the same type (which cause others to fall downwards and/or move towards the center column). Rather than time, players are ranked on the amount of tiles left-over (in ascending order).

Based on Color Lines. Players are given a 9×9 board and score points by forming lines of 5-or-more stones of the same type (horizontal, vertical, or diagonal). Players start with 5 random stones at random locations, and can move a tile to another location as long as there is an unobstructed path, horizontal and vertical, between them. After each movement where no matches are made, three new random stones (shown at the "Next" area) are randomly placed, and the game ends when there are no valid moves due to a filled board.

While the Hard variation plays normally, the Easy variation includes wildcard "Joker" stones, which can be used in place of any stone. These stones replace other newcomer stones at random.

Based on Columns. Keyboard controls only. Players guide falling blocks of three random stones (stacked on top of each other) on a 12×6 playfield, moving their position using the Left and Right Arrows, shifting their order using the Up Arrow, and hastening their fall using the Down Arrow. Groups of 3-or-more matching stones in a horizontal, vertical, or diagonal line are removed from the playfield, giving points and causing stones above them to fall downward (potentially causing additional matches with a chain multiplier). As more score is earned, the game's speed level rises to hasten the fall of each block (increasing the game's difficulty). The game uses six types of stones and ends when the third column (which is the starting position of the falling stones) is filled.

Each difficulty starts the game at different speed levels, with Easy at Level 1, Normal at Level 6, and Hard at Level 11.

Unlike other modes, Hashira's faster-paced action causes the nagware aspect of the game to become a detriment, as the game summons the pop-up at the center of the board at random moments.

Based on Bejeweled. Players are given a 8×8 board pre-filled with a random assortment of stones and score points by forming groups of 3-or-more matching stones in a vertical or horizontal line (causing them to disappear, the above stones to fall downward, and new stones to fall from the top to fill in the gap, the latter two potentially causing additional matches with a chain multiplier). They swap the position of two adjacent stones in an attempt to make a match (with the stones swapping back if no match is formed), and the game ends when no valid swaps can be made.

Each difficulty uses a different number of types of Stones, with Easy using six and Hard using seven. 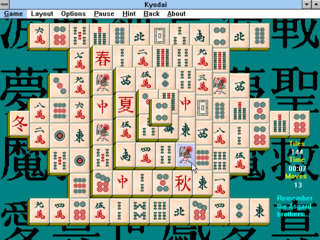