Part sequel, part remix, Theron's Quest is a version of FTL Games's Dungeon Master developed for the TurboGrafx-CD. It included a new story and many other changes, including breaking up the game into multiple smaller dungeons.

Dungeon Master: Theron's Quest is a re-imagining of FTL Games's original Dungeon Master. Though it uses the same art assets and the combat/magic systems of the original game, Theron's Quest has a new story with intro and outro cutscenes, and changes the game's focus from exploring one huge dungeon and stopping Lord Chaos to exploring seven different dungeons to recover pieces of a fantastical set of armor.

The game's story focuses on Theron, a young shepherd who was late to his coming of age ceremony. To prove himself a man, he agrees to the request of the powerful wizard The Gray Lord (he who would become Lord Chaos in the original game) to seek out parts of the suit of armor known as the Seven Symbols of the Brave. To do so, he needs to explore seven different dungeons, each containing a part and protected by an evil creature.

Each dungeon is treated as a separate scenario. Any items obtained or skill increases gained by recruited champions are scrapped after completing the dungeon; the only constant is Theron himself, who grows more powerful to match the greater challenge the later dungeons present. The goal of each dungeon is to find the named relic and return it to the dungeon's starting point. Each dungeon has its own characteristics and dangers, though most of the monsters and level design is based on the dungeon of the original game (and occasionally from its official expansion pack Chaos Strikes Back).

Theron's Quest is exclusive to the TurboGrafx-CD platform. It was published in Japan by Victor Interactive in late 1992, and by Turbo Technologies in North America the following year. 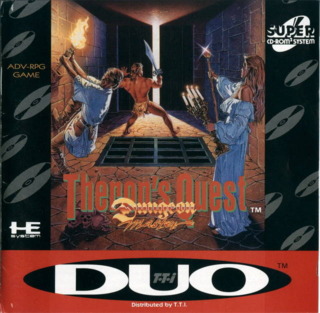