A goofy Japanese adventure game for the Famicom where the player assumes the role of Erika, an aspiring pop idol trying to win her family's inheritance and foil the evil plans of the Kooky King.

Idol Hakkenden is a Famicom adventure game, based on the same menu systems found in other Japanese adventure titles of the time such as Portopia Renzoku Satsujin Jiken. The game was developed by Natsume while Towa Chiki published the game exclusively in Japan on September 14, 1989.

The player, as the derpy Erika Saionji, and her two older sisters are told by their grandmother, one of the richest people in the country, that she believes she will die soon. The grandmother tells the siblings that she plans to give her inheritance to whichever of the sisters can become the most successful in their field within the next three months. However, while the older sisters are already very successful, Erika has no talent whatsoever except for her beautiful singing voice so her nanny suggests that she use her sole skill to become a famous idol in order to win her family's fortune. Erika must train her voice, learn the lyrics to various J-Pop songs, gather seven other girls to her team and even stop the evil machinations of a secret organization all on her quest to become the nation's favorite idol.

The game's title and its plot loosely relates to the famous Japanese 19th century epic novel Nansou Satomi Hakkenden (or Eight Dog Chronicles) about eight samurai half-brothers. The game features eight heroines including Erika, all of which are met during the game's story and have varied personalities.

The game is also notable for being one of the earliest projects from Natsume, best known for their Harvest Moon series and a number of well-regarded NES and SNES titles, like 1991's Shatterhand and 1994's Wild Guns. Idol Hakkenden is thought to be their second project, after 1988's Touhou Kenbun Roku. 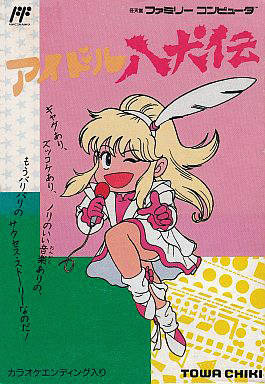