A TurboGrafx-16 and Genesis platformer based on the TaleSpin license. Unlike the Capcom NES/GB shoot 'em up, Baloo is on foot and looking for vital objects in distinct regions.

TaleSpin is a licensed platformer from Interactive Designs that was released on both the Sega Genesis and the TurboGrafx-16 based on the TaleSpin Saturday morning cartoon from Disney. The two versions have a few significant differences, but both has Baloo tasked with exploring environments in and around his hometown of Cape Suzette for valuable items in order to save his and Rebecca Cunningham's air courier service Higher for Hire.

The game should not be confused with Capcom's Disney's TaleSpin for NES and Game Boy, which is a shoot 'em up that uses the same Disney property.

The 1991 TurboGrafx-16 version has Baloo chase after pieces of a stone map to find some fabulous treasure, though Higher for Hire's chief rival Shere Khan and his hired air pirate goons led by Don Karnage are also searching for the pieces. In each of the four stages, the player is also optionally tasked with collecting ten specific items to obtain a bonus to their score. Between stages, Baloo's protégé Kit Cloudkicker can collect additional bonuses while "sky surfing" behind Baloo's plane, the Seaduck.

The 1992 Genesis version has Baloo competing with Shere Khan to deliver cargo, and is instead tasked with exploring each region for ten cargo crates before he can exit to the next stage. The stages have copious amounts of hidden areas, and so need thoroughly exploring. Once again, Shere Khan and Don Karnage are hoping to stop him. Baloo also attacks with his paddle ball in the Genesis version, whereas in the TurboGrafx-16 version he throws coconuts. 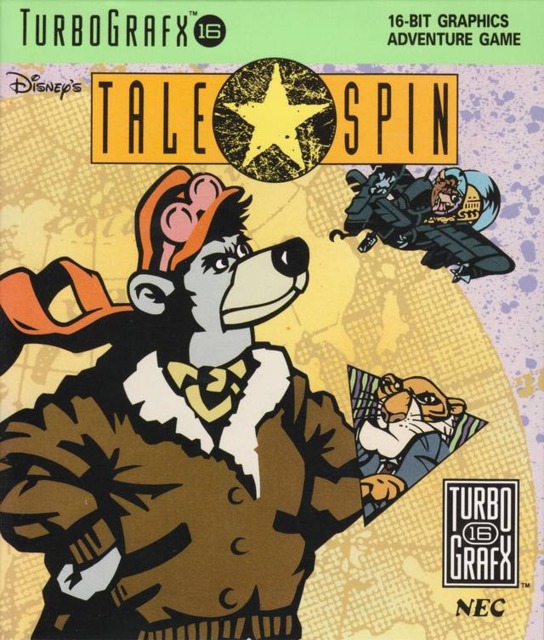