Hissatsu Shigotonin (Translated: Deadly Work People] was released December 15, 1990 exclusively in Japan for the NES. It is an RPG biased off of the popular historical drama TV show of the same name. The Story focuses on a group of ordinary work people who have double lives as assassins.

Hissatsu Shigotonin (Translated: Deadly Work People] was released December 15, 1990 exclusively in Japan for the Nintendo Entertainment System. Hissatsu Shigotonin is actually biased off of the popular Japanese historical drama TV series of the same name. The story of both focuses on a group of ordinary "work people" who live double lives as assassins. It is an alternate Feudal Japan history (1603-1863) featuring fictional characters with elements of a parallel world. You must uncover a mystery though out the game, which comes through the story in episodes like the TV show. The player controls Nakamura Mondo, a fictional character who is also the star of the TV show. The game is biased on the original 84 episode run/first season of the TV series from 1979-1981 but features characters all the way up to the game’s release date. The show continues to this day with Assassins as a subtitle. Nakamura Mondo, is a corrupt cop known for accepting bribes, who is disrespected by his superiors and family. Mondo ends up bringing together a group of people that have all been wronged in some way, formed to solve mysteries and assassinate targets. The heroes play by the same rules as the villains, as they are not afraid to use underhanded tactics to get the job done. Each episode of the show usually climaxes with the killing of the target, sometimes in an almost humorous manner such as a flower through the skull. An analogy for American's would be to think Al Bundy the Samuri and his gang of misfits.

Nakamura Mondo - A corrupt cop who thinks for himself, gets crapped on by everyone in his life. A pretty average middle aged man with a Robin Hood sense of heroism.

Kajiya no Masa (Blacksmith of Government) - Went from being a florist to a blacksmith when called upon. Has has had many lovers that usually end in tragedy.

Kumihimoya no Ryu (Dragon of Kumihimo-ya) - Craftsman, who despite thin feminine features and bright flashy clothes, is actually a tough roughneck.

Kazari no Shu (Decoration of Xiu) - A decorator who likes to hide and attack from the shadows. Joins to avenge murdered best friend.

Oriku (Acrostic) - He is the son of Yuji. The word acrostic is a type of poem. 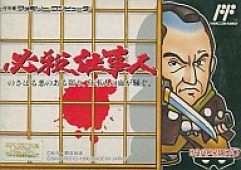