Puyo Puyo 2, also known as "Puyo Puyo Tsu", is the second game in the Puyo Puyo series of tile-matching games.

Puyo Puyo Tsu, also known as Puyo Puyo 2, is the second game in the Puyo Puyo series. The original arcade version was developed by Compile for Sega's Mega Drive-based System C2 hardware, and was published by the latter company in September 1994. Mega Drive and Game Gear ports, also published by Sega, were released in December 1994; other Compile-published ports would be released in the following years.

Puyo Puyo Tsu makes subtle changes to the original Puyo Puyo's ruleset. It introduces "offsetting", which allows players to erase garbage pieces ("Nuisance Puyo") that are waiting for them, and "margin time", which attempts to speed up play by periodically increasing the amount of garbage that is sent per chain.

The Neo Geo Pocket Color port is the first unmodified version of Puyo Puyo to be released outside of Japan. The Virtual Console release of the Mega Drive version is offered worldwide (under the name "Puyo Puyo 2") as an import title; the game remains untranslated and costs slightly more than a localized title on the service.

While not a port or remake of Puyo Puyo Tsu, the GBA Puyo Pop (Minna de Puyo Puyo) uses this game's ruleset.

Like other games in the Puyo Puyo franchise, Puyo Puyo 2 is a competitive tile-matching puzzle game where falling pieces must be placed alongside one another to form color combinations. If four or more pieces of the same color are placed next to each other, the chain of pieces disappears, freeing up space on one player's screen while introducing extra garbage pieces to the other player's screen.

As in the original Puyo Puyo, both single and multiplayer modes are included, with the single player mode featuring the return of protagonist Arle Nadja. New in this release is a tiered progression system, where players must amass a certain number of points within each tier of levels before moving on. Also new is the introduction of "offsetting", which allows a player to remove garbage pieces sent to them (and even send them back to their opponent) by quickly performing a combo before the garbage falls.

As mentioned before, the single player mode consists of several "tiers." The player chooses an opponent via roulette to battle and continues until either enough points have been amassed to "Level Up" or they have fought all of the opponents; if the latter happens, the player fights an extra opponent. If the player still hasn't gained enough points, they will receive a Game Over.

The "extra" opponent is noted in parenthesis:

As previously mentioned, the Neo Geo Pocket/Color port of Puyo Puyo Tsu was released outside of Japan as Puyo Pop. The game is graphically similar to the Game Boy version; both versions of the game use stripes and various shapes as a means of differentiating Puyo in their respective monochrome modes. Due to the limitations of the Neo Geo Pocket's sound hardware, the player must choose between in-battle BGM or Arle's voice samples.

Puyo Pop contains many of the features present in other home versions of Puyo Puyo Tsu. The 1P vs. COM mode now features three difficulty levels: Easy contains three sets of easier opponents, Normal is the single player mode of the arcade game, and Hard is a gauntlet against all 33 opponents. The Self Dev. mode contains 1P (Endless Mode) and Exam, which assigns the player a rank after he or she clears three rows of Nuisance Puyo.

Unlike previous Western-released Puyo Puyo titles, the game retains most of the Japanese version's Madou Monogatari-based characters and names. The sole exception is Satan; his name is changed to "Dark Prince", the same name that he used in the unreleased "Puzlow Kids" translation of the first game. 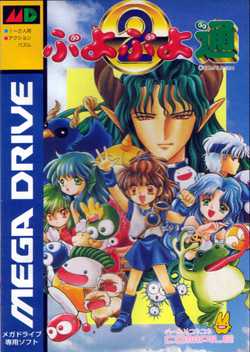