Caesar continues to carve out his empire in this RTS sequel for the Sega Mega Drive and Genesis.

Warrior of Rome II (JP: Caesar no Yabou II) is an RTS game based on the military campaigns of Julius Caesar, the progenitor of the Roman Empire. It is the sequel to Warrior of Rome.

The game features twenty scenarios that the player can try sequentially, as a campaign, or individually in any order they choose. The campaign total requires beating fewer than the full twenty maps however due to how it can branch at certain points between multiple options.

Gameplay consists of maneuvering around units in real time to defeat the enemy forces, and units that survive will eventually grow more powerful and evolve into stronger units depending on their actions: a basic infantry that moves around a lot might become a more mobile cavalry unit, for example. Players can also build a handful of structures to increase their chances of success, from fortresses to shelter wounded units or train new ones to shipyards with which to construct naval units. 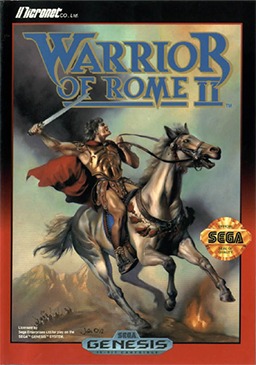