After a great evil threatens the world, four warriors with mystical powers are called forth to foil its ambitions in this side-scrolling action game.

Shadow Blasters (JP: Shiten Myouou, or "The Four Kings of Dawn") is a side-scrolling action/brawler game for the Sega Mega Drive/Genesis developed by Sigma Enterprises and Cyclone System. The game was published in North America by short-lived localization house Sage's Creation.

The story of the game concerns the return of Ashura, a powerful force of evil from beyond the stars, and the four heroes chosen to defeat it: the ninja Horatio (JP: Kotarou), the kunoichi Tiffany (JP: Ayame), the Buddhist monk Marco (JP: Kidenbou), and the kendo fencer Leo (JP: Senshirou). All four share a default attack, but can charge up by holding the attack button down and produce stronger special attacks unique to each character. The player is able to tackle the first six stages in any order before taking on the final fixed trio. 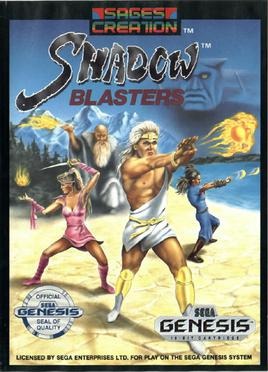