'Bully: Scholarship Edition' takes place at the fictional New England boarding school Bullworth Academy, and tells the story of mischievous 15-year-old Jimmy Hopkins as he goes through the hilarity and awkwardness of adolescence. Beat the jocks at dodge ball, play pranks on the preppies, save the nerds, kiss the girl.
Xbox 360

Bully: Scholarship Edition is an extended port of the game Bully (Canis Canem Edit in Europe) originally released on the PlayStation 2 in October 2006. The enhanced port was released on the Xbox 360 and Nintendo Wii in March 2008 and to the PC in October 2008. The additional content included in the 'Scholarship Edition' was several additional story missions and two extra classes not featured in the original release. New NPCs were added and additional lines of NPC dialogue was included as well as including new unlockable items and items of clothing. The voice files which were compressed in the original release were replaced with higher quality versions.

The Xbox 360 version of this game was noted for containing additional bugs and glitches not seen in the original release. While most of the bugs on the Xbox 360 can be amended through installing the game onto the console's hard drive an additional patch was released to correct some of the most prominent issues found in the game.

Players take on the role of 15 year old student Jimmy Hopkins. The game opens with his mother and stepfather arriving at the Bullworth Academy, where they offload Jimmy. The two are intending to go off on an idyllic cruise, and they offload Jimmy at the boarding school in New England. Jimmy has something of a reputation as a troublemaker, and his mother apparently has remarried several times because of him.

The game begins with you learning the ropes of the school. Along the way you meet the cliques of the school, and will meet up with Gary and Peter. They act as your guides for much of the game opening, and eventually, Gary tries to stab you in the back. Once this happens, as Jimmy, you must earn the respect of each of the cliques and get revenge on Gary. The game is split into six main chapters, though you need only complete the first five to see the credits roll. Below is the general aim of each chapter:

Jimmy arrives at the school and is taught the hierarchy of Bullworth Academy by Gary and Petey. The chapter ends when Gary betrays Jimmy and Petey and begins his quest to rule the school.

Although Jimmy's popularity has increased the "Preppies" faction continues to belittle him. This chapter sees Jimmy earn the respect of the "Preppies".

Set at Christmas time, Jimmy manages to get himself involved in a situation with the "Greaser faction" in particular with the Greaser faction leader, Johnny Vincent, and his girlfriend, Lola.

Chapter Four: A Healthy Mind in a Healthy Body and Other Lies.

This chapter revolves around trying to take on the Jocks at the school. However, to even stand a chance against the Jocks, Jimmy must enlist the help of the Nerds.

Chapter Five: The Rise and Fall of Jimmy Hopkins, Aged 15.

This is the final chapter of story in the game, and with all the school cliques behind you, you need to take down Gary, and find out who is responsible for the ongoings at the school

This is merely the end mode of the game. Basically, you have no story and may complete side missions etc.

Bully features some different gameplay from other Rockstar titles. The game relies heavily on minigames that take the role of different school classes. Each class has its own benefit for succeeding. For example, being proficient in English means you can talk your way out of a misdemeanor.

You may also earn weapons as your progress. However, unlike in Grand Theft Auto, you do not earn guns. You get weapons a schoolboy may possess, such as a Slingshot. Rather than killing other characters as well, you merely knock them out. Fighting in Bully is an important part of the gameplay, although violence against girls, authority, and younger pupils has very severe

consequences. Not only this, but you may earn different vehicles too. Initially you get a Skateboard early in the game, but you will eventually get bikes as well. You can also win a Go Kart, and purchase a Scooter. As you progress you earn the ability to buy more clothing and equipment for Jimmy. Eventually you can also purchase tattoos for him. You will unlock different areas of the town through game progression, and these areas are:

As you progress through Bully, you will earn money, which you can spend on different equipment. For example, you may purchase Stinkbombs and other such goods to resupply your inventory. Not only this, but there is a fair that opens up when you reach the town area, and take part in one of the Preppie missions. At the fair you can take part in different fairground activities, which will earn you tickets. These tickets can then be redeemed at the store in the fair for exclusive prizes, such as the Scooter, and different posters which can decorate Jimmy's room in the school. Should you choose to purchase a bike in-game, apart from the Scooter (which is the fastest bike you can get), the best all round bike is the Aquaberry, as it has the best blend of stats. Generally, most of the AI opponents will not be using the Aquaberry Bike, which already puts you at an advantage.

There are 10 different classes in Bully: Scholarship Edition, and they all have five levels each. This means there are 50 individual lessons you are tasked with completing. They must be completed to earn the full 100%.

Maths questions are given to the player and you must complete a set number within time. Questions range from general sums to basic equations, and are always multiple choice.

You are given some letters and must form a set number of words to pass the level of the class. It becomes harder with each lesson.

You must press the correct button as each prompt passes.

Using the given tools you must dissect an animal in a suitable manner. Animals range from a rat to a pig, and become harder

You must guide a line around the art paper, and avoid enemies. It plays a lot like the arcade game Qix, and enemies become more common as you progress.

You must press the correct button as notes pass through them, ala Guitar Hero.

You must match the names of countries to different countries. This is commonly regarded as the hardest lesson in the game.

You are given a camera and are tasked with snapping images of different things.

The game has two different Gym lessons. The first lesson is wrestling, where you are taught new moves and given an opportunity to try these moves on an AI character. The other version is Dodgeball, where you are put on the Nerds team, and must beat the other teams.

You simply have to press the buttons in rhythm as they appear on the screen. This is a simple enough class, and as you progress through it, button presses become more complex.

There are different cliques that all co-exist in Bullworth Academy, and they all have their own leaders and styles. Below is a comprehensive breakdown of each group:

The Nerds are the weakest clique, but they have the best weapons, and are the most intelligent. They all wear green colored school tops, and are generally bullied by all the other cliques.

The Jocks are physically the strongest clique, and they can withstand a ridiculous amount of damage. However they do not use any weapons, so they are easily outclassed at range with the Slingshot and other such weapons. Jocks are easily found around the football field.

The Greasers wear leather jackets and look like Grease rejects. However, they are the poorer clique and can be found around the Shop area of the school, as well as in the Trailer Park.

The Preppies are the richest group in the entire school, and wear expensive looking clothing. They are fond of boxing and can be found at the boxing club in Bullworth Town, as well as at the Aquaberry clothing store.

The Bullies wear white school shirts, which are untucked, and delight in bullying students. They will start fights regardless of their odds of winning.

Like all Rockstar games, there are a multitude of different collectibles for you to hunt down. Unsurprisingly, they are all needed for the 100% completion. Bully: Scholarship Edition makes this an easier task through the inclusion of the Geography class, which awards the player with item locations on their map as they progress through the class.

Around the world you may find blue rubber bands. There are 75 of them, and when you collect all of them you get a rubber band ball. This ball is the best weapon in the game as it one hits everyone, including Jocks.

There are hidden cards from a game the Nerd clique loves, called Goblins and Gremlins (reference to Dungeons and Dragons, clearly). Once you collect all these cards you receive a unique themed costume.

Around the area of Bullworth there are 25 gnomes. Destroying all of them will earn you a gnome costume.

There are six radio transistors that you should aim to collect. For every transistor delivered you learn a new, powerful melee attack.

Cover Art for the Scholarship Edition of the game is the same across all regions. However, it does vary from the art used for Canis Canem Edit.

The art used for the Scholarship Edition of Bully shows artwork of Jimmy Hopkins in a 'staredown' with the school's headmaster, Doctor Crabblesnitch. This artwork is layered over the background, which is the school crest.

Bully: Scholarship Edition Review
Saints Row 2 Scarface: The World is Yours Driver 2: The Wheelman is Back Kenka Bancho: Badass Rumble Harry Potter and the Half-Blood Prince The Warriors Bully 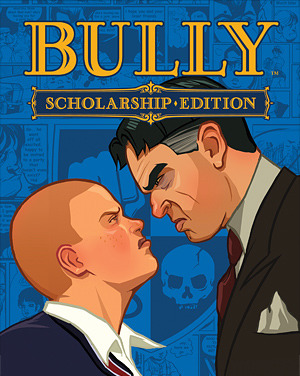