An action-adventure game from Konami based on the 1985 movie. Mikey must save the other Goonies from the Fratellis, pirate ghosts and an enormous octopus by finding keys to progress.

The Goonies is a side-scrolling action-adventure game from Konami that was first released on the Japanese Famicom in 1986 and quickly ported to the Sharp X1, MSX and PC-8801. A Famicom Disk System followed a couple years later: this version was only made available via the Disk Writer service. The game finally saw its US debut with the Arcade adaptation Vs. The Goonies from the PlayChoice-10 range.

The game was followed by a sequel that diverges from the movie's story and is better known to US audiences. The game is not to be confused with the 1985 Datasoft game for the C64, Atari 8-Bit and Spectrum which was closer to The Lost Vikings with its co-operative puzzles.

The game features Mikey as he runs around various stages based on locations from the movie - the closed restaurant that the Fratellis use as a hideout, the caverns beneath the restaurant and One-Eyed Willy's pirate ship - saving his friends and recovering keys. In order to progress, Mikey must find three keys and the captive Goonie on each stage. As well as bats, rats and other hostile wildlife, Mikey is being pursued by the three Fratelli family members: they cannot be defeated, but can be stunned temporarily.

Mikey can find power-ups that help him proceed. The most important of these are bombs which destroy walls marked by skulls and reveal keys and captive Goonies behind them. Permanent bonuses like headphones (which prevents Mikey being hurt by Jake Fratelli's opera singing) and a backpack (which allows Mikey to carry two bombs at once) can also be found, but only once and each in a specific stage. 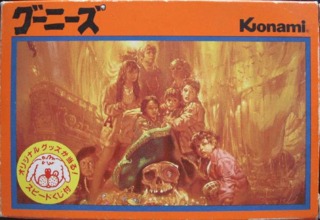