A cancelled third-person action adaptation of the Multiplayer Online Battle Arena sub-genre, developed from the studio behind the Unreal Tournament and Gears of War game series. Although it remained in open beta for a few years, it was later discontinued on April 2018 prior to an actual release.

Paragon was a multiplayer-focused sci-fi fantasy third-person action game developed and published digitally by Epic for the PlayStation 4 and PC as an open beta on March 18, 2016. It was later made free-to-play (with a retail "essentials pack" release for the PS4) on June 7, 2016. It was later cancelled on April 26, 2018, with its online servers, and its digital download, discontinued.

Similar to the 2014 game Smite, Paragon brought the MOBA (Multiplayer Online Battle Arena) concept to a limited behind-the-back perspective, with gameplay similar to traditional third-person action games. Players chose from a limited amount of Heroes in five-on-five matches as they used their special abilities and worked together to guide their minions towards the enemy base (where they must destroy the enemy core).

A key unique feature that separated Paragon from other MOBAs is its collectible card system, which served as a replacement for the traditional item-based system. Outside of game matches, players could build custom decks of special gameplay-altering cards similar to traditional collectible card games (similar to Hearthstone and Magic: The Gathering). Gold earned during each match were used to purchase and use/equip these cards.

Although the game itself received numerous updates (including a complete revamp of some gameplay mechanics) and additional playable characters throughout 2016 and 2017, support for the game was abandoned in 2018. Its online functionality (and digital download) were later permanently disabled on April 26, 2018, and is considered cancelled due to remaining in open beta status.

It was built on the studio's Unreal Engine 4, and its game assets (including characters and environmental components) were later released for free for use with Unreal Engine 4 projects starting on March 19, 2018.

Matches in Paragon are currently limited to being five on five, in three variants: players vs. players, players vs. AI, and player with AI vs. AI. The object of the game is to destroy the enemies' core, thus ending the match. Matches can also end when either team chooses to surrender. Before even being placed in a lobby, Paragon players choose the hero they wish to play in their next match. Two players are allowed to play the same hero in a match, as long as they are on opposing teams. Some heroes require the player to be a certain level to play, and in the future, the player may have to purchase heroes.

In Paragon, as in most other MOBAs, waves of minions periodically spawn from either side of each lane and march towards the other end. Destroying these minions, the enemies' towers, and the enemies themselves awards players experience, which levels up their hero, and "amber," which converts into the currency one must use in order to purchase cards. Minions also spawn from "camps" located in the jungle. Certain "jungle creeps" can award the player "buffs," which boost their hero's stats or abilities.

The Prime Helix Guardian is located in a large clearing, in the neutral part of the jungle. It is difficult to kill and drops the "Orb Prime," which is a modifier which contains the ability to bestow a boost to all of the owner's teammates.

Each team's core is protected by three inhibitors, which mark the ends of the three lanes. When one of a team's inhibitors gets destroyed, the opposing team gets to have more powerful minions spawn for that lane for a long period of time, after which the inhibitor gets rebuilt. If a team destroys all three of their enemies' inhibitors, they get minions that are huge, and massively powerful. Destroying at least one of the enemies' inhibitors is necessary to reach their core, however destroying all three is ordinarily the safest path to victory.

Agora has the expected layout and composition of most MOBAs, with a few exceptions. Agora has:

Two aspects of Agora set Paragon apart from other MOBAs: its verticality and its shadow pads. There are many cliffs and staircases throughout the map, giving the chance to have combat scenarios with three dimensions of fire. Furthermore, some heroes have abilities that allow them to jump or teleport onto higher planes, which allows them to escape, or have a vantage point. Shadow pads are circular areas scattered throughout the map that render players invisible to others who are standing outside of it, and are also not on their team.

The initial release of the game included 13 Heroes, with additional Heroes added mostly once-or-twice a month. The game's final Hero release was Terra, added on December 12, 2017, which brought the total roster to 37.

In earlier versions of the game, each Hero was given a certain Card Affinity, restricting each player's deck usage to one of five Affinities (Chaos, Death, Growth, Knowledge, and Order). This restriction was removed in a later update.

In MOBA terms, cards are the items that one would buy from the shop, in order to upgrade the stats of their character or give themselves an extra ability. In Paragon, players must choose a "deck" that they wish to play with, in order to start a match. You can build custom decks outside of matches.

Players collect cards from card-packs, which you can receive by either leveling up or by purchasing them (currently, with in-game currency only). Each hero also has built-in decks that you can use, but the selection in them is limited.

Cards can make players' heroes passively stronger during match play. They can also provide "active" abilities. For example, a "Health Potion" card allows players to briefly boost how fast their health regenerates. Certain cards have three "upgrade slots," which are filled by buying upgrade cards. Once a card is fully upgraded, a bonus ability boost that is unique to that card gets activated.

In older versions of the game, there are certain cards called "Prime Helix" cards, which grant players abilities and boosts that are only available while their team has the "OP Buff." 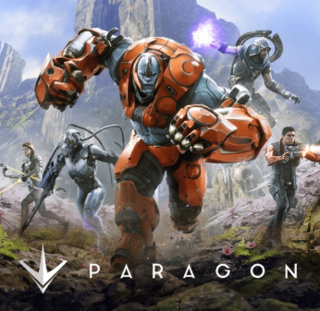