An action platformer Famicom game based on the surreal gag manga Utsurun Desu. Like the manga, the game makes very little sense and is filled with non-sequiturs and impossible sequences.

Utsurun Desu.: Kawauso Hawaii e Iku ("It Infects You: Kawauso Moves to Hawaii") is a side-scrolling platformer with a surreal sensibility that tricks and confuses players. Arrows frequently point the wrong way, for example, while a mountain in the background can be walked over to avoid a spike pit.

It is based on the gag manga Utsurun Desu and features its most popular character Kawauso, who is either an otter or a man wearing an otter suit. In this game, Kawauso is trying to get to Hawaii, but frequently and randomly ends up on different corners of the globe.

The game was published by toy and media giant Takara and developed by an unknown Japanese contract developer. 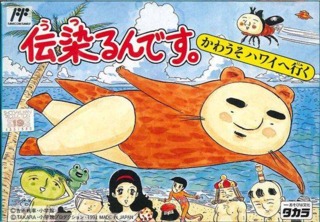