Ninja Hattori-kun is a 1986 side-scrolling ninja game in which the player has to evade an ongoing horde of rival ninja and other enemies using acrobatics to stay out of their reach and collect score items. The hero Hattori-kun can also acquire ninja powers to assist in his survival.

Ninja Hattori-kun is based on the manga and anime of the same name. The manga was first published in the 1960s, but its anime adaptation aired in 1986. The game was intended to be a tie-in for the anime.

The protagonist, the eponymous ninja Hattori-kun, can use shurikens to eliminate enemies before they can reach him, though some enemies require several shots and it's easier to avoid them. The player can also acquire ninja power-ups by collecting scrolls which provide temporary boosts, like increasing Hattori's running speed. 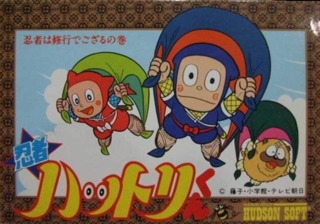