A college basketball game for the Sega Genesis and Super Nintendo. The inaugural game in the NCAA Final Four series.

NCAA Final Four Basketball is a basketball game for 16-bit consoles. It features the National Collegiate Athletic Association Basketball organization and includes all sixty-four teams - from all four regions - in the 1995 NCAA Men's Division 1 Basketball Tournament. The game is more simulation-based than Arcade-based, unlike NBA Jam and its contemporaries.

It features two practice modes: one for learning the game's controls and the other to practice the game's free throw mini-game. The player can play a one-off exhibition match or set up the full sixty-four team tournament and try to make it to the final four. 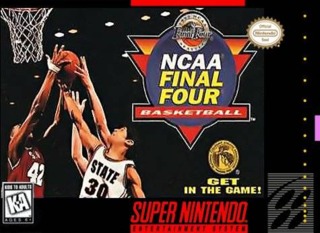