A top down action game, loosely based on the popular 1960s TV series.

Fester's Quest is an NES title by Sunsoft that is a spin-off of the 1960s television series, The Addams Family. The player takes the role of Uncle Fester trying to ward off an alien invasion with the help of other Addams family members.

The game has been called "very challenging", due to respawning enemies, difficult shooting mechanics and slow character movement. Computer and Video Games magazine issue 108 rated the game at 56%.

Fester encounters other members of the Addams Family: Thing, Wednesday, Morticia, Grandmama, and Pugsley, who all help him by giving him different weapons and items (lightbulbs, keys, TNT, etc.). The game is a top-down shooter and uses Blaster Master's overhead shooter engine.

Fester may enter certain buildings, which transform the game from its standard overhead view into a 3D first person mode. In most buildings, Fester encounters one of five enormous Alien Boss characters, which upon defeat (killed by whip), will supply him with a puzzle piece, a picture of the alien's UFO. After defeating a boss, Fester will leave the building and be unable to backtrack through it to previously visited areas. 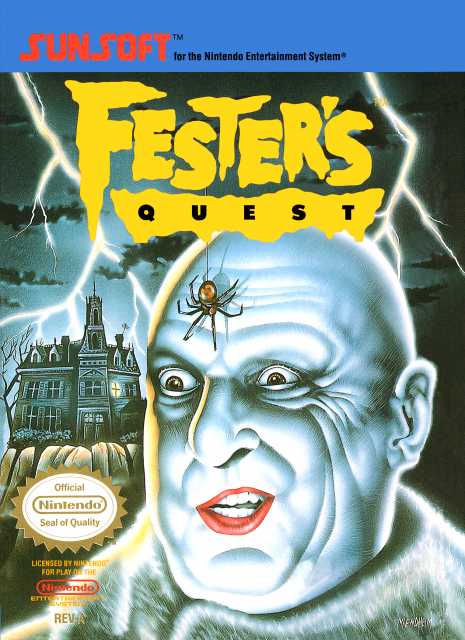