A text-based visual novel with a horror theme that was released for the Super Famicom and later rereleased for Sony PlayStation.

Gakkou de atta Kowai Hanashi ("Scary School Tales") is a visual novel with a heavy emphasis on scrolling text and photo backgrounds, with the school-aged cast depicted by photos of actors. The game has a horror theme with a spooky tale that is shown from various angles, depending on the character the player chooses to play as.

The game was later rereleased via the Nintendo Power service, a disk-writing service that allowed Super Famicom owners to rewrite a blank cart with a number of digital options as a cheaper alternative to buying the games separately. It would also be released on the Wii's Virtual Console in 2008 and the Wii U's Virtual Console in 2014, both in Japan only. 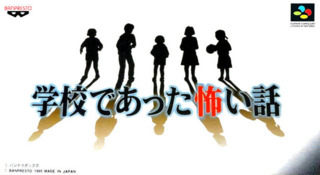