A virtual adaptation of The Game of Life board game. The second of three official adaptations made for the Super Famicom.

Super Jinsei Game 2 ("Super Game of Life 2") is a board game adaptation for the Super Famicom and the second of three official adaptations of the Milton Bradley board game The Game of Life from the Japanese license holders Takara.

The player selects an avatar and makes their way across the board, landing on either positive or negative event spaces. Depending on how they answer, the player can increase or decrease in stats and financial status or have nothing happen to them. The goal is to make the most money by the end of the game. The game supports up to four players, with any remaining slots taken by CPU opponents. 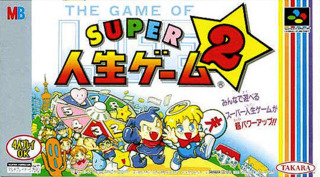