Osomatsu-kun: Back to the Me no Deppa no Maki

The second game based on the Osomatsu-kun anime and manga, released in 1989 for Famicom.

Back to the Me no Deppa no Maki has a time-travelling theme (its title is a riff on Back to the Future) and sees breakout character Iyami in the lead as he causes mischief across the present day, the Edo period and the prehistoric era.

In addition to common commands represented by ideograms, including an ear for listening to NPCs and a shoe for moving to different areas, there are a few distinctive and context-based commands too, including one (a light bulb) that allows the player to read the protagonist's innermost thoughts for more information on their current situation. Additionally, the player moves around via a top-down overworld view usually seen in RPGs.

Back to the Future: The Game Time Twist: Rekishi no Katasumi de... 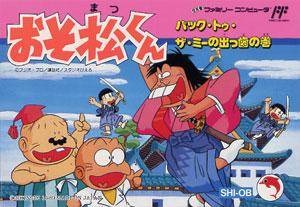