A compilation of Koei's three EMIT games: visual novels with a CD audio component. This set marked the trilogy's first appearance on the Sony PlayStation.

EMIT: Value Set is a compilation of Koei's three EMIT games: EMIT Vol. 1: Toki no Maigo, EMIT Vol. 2: Inochigake no Tabi and EMIT Vol. 3: Watashi ni Sayonara o. This trilogy was originally released for the FM Towns in 1994 before getting ported in early 1995 to 3DO, Sega Saturn and Super Famicom - all but the last took advantage of the CD format to provide redbook audio music, sound effects and voiceover. The Super Famicom version came with additional audio CDs that were meant to be played simultaneously with the game on a CD player, and that version frequently pauses the game to present prompts to skip to specific audio tracks.

The story concerns a time-travelling passageway that appears in the basement of a book store that begins to interfere with the life of regular teenager Yuri. The games have both Japanese and simplified English subtitles as well as media player tools to pause the story or skip to different chapters.

The Value Set compilation was released for Super Famicom, Sony PlayStation (its debut for that system) and Sega Saturn in limited quantities.

Getsumen no Anubis Zakuro no Aji 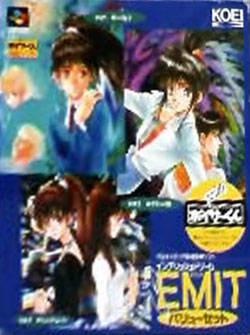