A sci-fi horror visual novel that relies on text, static backgrounds and sound.

Getsumen no Anubis ("Anubis of the Moon's Surface") is a visual novel for the Super Famicom. Like Chunsoft's "sound novel" series, the game conveys its story through a series of background images with text. The game also uses sound and music to set the atmosphere and create dramatic moments.

The male protagonist and female deuteragonist, both of which are named by the player but are by named Keisuke and Kaori respectively by default, are astronauts living on a high-tech facility on the moon with a staff of scientists and soldiers. A number of mysterious incidents threaten the safety of the moon-dwellers, forcing the player to determine what is causing them and resolve the situation. 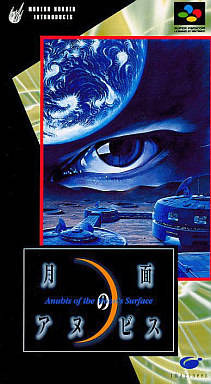