Tashiro Masashi no Princess ga Ippai ("Masashi Tashiro Has So Many Princesses") is a side-scrolling platformer game released for the MSX2 and Famicom that features and is named for the Japanese celebrity Masashi Tashiro, known for his comedy shows, TV presenting, co-founding the band Rats & Star and for various legal troubles later in his career. The goal of the game is to rescue four fairy princesses from evil witches, and there are multiple endings that the player can earn depending on certain factors.

Tashiro's chief weapon is his yoyo, which can be thrown vertically as well as horizontally. It can be upgraded for a spreadshot affect. 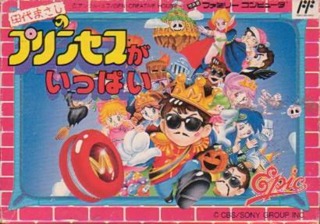