A war strategy game based on a period drama TV show which in turn was based on a 14th century epic novel.

NHK Taiga Drama: Taiheiki is a strategy game for the PC Engine and Sega Mega Drive that was commissioned by NHK, a national broadcasting corporation in Japan. They had previously adapted their TV show Niko Niko Pun for the PC Engine the previous year. The two games are distinct but for the fact that they are based on the same piece of media.

NHK Taiga Drama: Taiheiki is based on one of NHK's annual year-long historical fiction TV shows, collectively known as Taiga Drama, specifically the 1991 episode based on Taiheiki: a novel from the 14th century that is set between the years of 1319 to 1367 and concerns a war between the Southern Court of Emperor Go-Daigo in Yoshino and the Northern Court of Ashikaga Takauji in Kyoto.

The goal of the game is to defeat one's opponents by deploying and organizing their armed forces to best counter the enemy's attack. When two units meet, there are animated cutaways that demonstrate which side did the most damage, similar to those in the Advance Wars series. There are minor graphical differences between the two games - e.g. the PC Engine version has a hexagonal grid map, while the Mega Drive version uses squares - but play similarly. 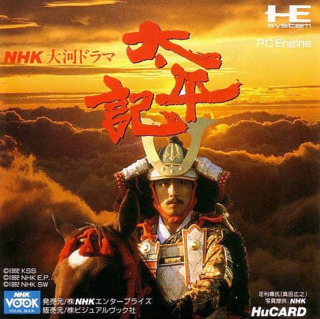