Pitfall Planet is a top down puzzle game developed by Bonfire Games. The game was released on May 2, 2016 on steam. They later partnered with Abstraction Games to release a port to the Nintendo Switch on April 4th, 2019.

It offers a 2 player Co-Op campaign or a single player campaign where both characters are controlled on one controller.

Pitfall Planet began as a student project between University of Toronto and Ontario College of Art and Design University. Students Adam Robinson Yu, Alexander Biggs, Daphine Ippolito of Uoft and David Czar, Emma Bureikitt and Guy Torsher of OCADU created the first set of the levels and won best overall game at Level Up showcase in 2015. In 2016 Pitfall Planet was one the finalist for Best Student Game at the Independent Games Festival.

Pitfall Planet is a puzzle game focused on collecting golden ore scatter through out each stage. Players can shoot out a grappling hook to collect gold, grab and carry each other, and sometimes pull them self across gaps. Once players have collected all the gold on a stage, an elevator opens up leading to the next stage. The end goal is to refuel your space ship and leave pitfall planet. 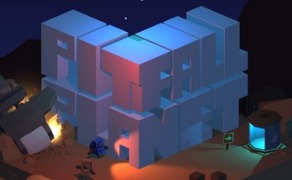