Burnout Paradise turns the Burnout series on its head by moving from closed set tracks to an open world full of events to experience both alone and in a group online.
Xbox 360 PlayStation 3 Xbox 360 Games Store PlayStation Network (PS3)

The fifth game in the Burnout series, Burnout Paradise makes a dramatic shift from the traditional Burnout formula by moving from a format of set races and closed tracks to Paradise City, an open world with events at nearly every intersection and a unique set of cooperative multiplayer challenges.

Online, the player can participate in standard point-to-point races or engage in any of 300 cooperative challenges. These challenges force players to work together on a variety of tasks, such as drifting a set distance, crashing into each other in mid-air over a specific jump, meeting at a specified location to perform stunts.

In addition to these set tasks, there are also hidden shortcuts to find, billboards to break, and super jumps from which the player can launch their vehicle. Finding all of the game's hidden items unlocks several additional vehicles (one for each type of hidden item). The game also has a competitive leaderboard that monitors the player's time on every road in the game. A new destruction-based mode, "Showtime", also makes its debut in Burnout Paradise. This mode replaces the puzzle-like crash mode of the previous games and effectively lets the player start a large, slow-motion crash anywhere in Paradise City. Damage totals are also stored and compared against friends for each road in the game.

The Xbox 360 and PlayStation 3 have all received multiple updates and free downloads. Each one of these was released as a download on each platform's marketplace but each new download includes all content from previous packs so only the most recent patch is required to play online and access all content. What this means is that Burnout Paradise 1.6 includes all released content and so any previous packs such as the Bike and Cagney updates can be deleted. The free DLC is also required to play online, this is due to the Premium content being included as a part of the free download meaning.

This fixed a firewall and security bug, a problem encountered online which was discovered in the demo. It helped a number of people trying to get online and repeatedly getting kicked out of games due to connection errors.

This was an update which corrected most of the bugs that got by in testing. Some of these include:

• Road Rage: Up to 8-player team event. One team must race through a series of Paradise City checkpoints. The other team must stop them.

Cue incredible chases and battling through the city, tons of voice communication as players co-ordinate their efforts.

Marked Man: A player is selected at random and everyone gangs up to take them down. The Marked Man scores for reaching the end point intact and taking anyone down along the way.

Other high-priority fixes and updates

This patch allows the purchase of the Legendary Car Pack. People with this patch will only be able to play online with people who also have the patch.

This patch allows the purchase of the Big Surf Island.

Sony released a downloadable version of Burnout Paradise on 25 September 2008 for $19.99 on the PlayStation Network. This version included all the free updates up to the date it was released and works exactly like the retail version of the game allowing the addition of paid DLC.

On 5 February 2009 Sony released a version of Burnout Paradise on PlayStation Network called Burnout Paradise The Ultimate Bundle. This re-release contains all of the free updates as well as the Party Pack premium DLC for $29.99. The boxed version was released in European regions only for Xbox 360, PS3 and PC. On August 11, 2009, Microsoft released Burnout Paradise as a part of their new feature "Games on Demand" for $19.99.

This first paid DLC is focused on local multiplayer content and allows players to compete in challenges where they take turns to achieve a goal. Challenges are split into "Speed", "Stunt" and "Skill" with up to 8 rounds per game and 8 separate players able to compete at one time.

This pack features 4 brand new cars based on vehicles from classic television and film:

The cars can be bought individually or as a complete bundle at a reduced cost.

Allows players to unlock all cars without having to play through the game first.

Features 9 vehicles which include mini versions of some of the cars featured in the original game.

Consists of the two fastest cars in the game, the Hawker Mech and Carson Extreme Hot Rod. These cars have new handling, boost and drift systems that are more realistic than any of the other cars in the game. The Hawker Mech is able to switch between the three regular boost types at will, while the Carson Extreme Hot Rod has a "locked" boost; once the boost starts, it cannot stop until the car crashes.

The Cops and Robbers pack brings players 33 all new police cars to roam Paradise City in, all themed off of international police cars. The pack also makes the online Cops and Robbers game mode available. In this 4 (Cops) v 4 (Robbers) game, each team chases after a block of gold that is randomly spawned at a location on the map. The cops must get the gold and return it to the Country Club, and the robbers must get it and return it to the docks. To make the game more intense takedowns were made easier to get and the car carrying the gold with handle worse and drive slower.

This was originally planned as a small area to the east of the original game map to be released as free content; however Criterion reworked their ideas and the content has grown considerably into a complete new island called "Big Surf Island". The developers stated that the new area will focus on the playground aspect of Burnout with many parts of the environment that the player can interact with.

Players unlock all 9 cars by completing different events on the Island. Four of the cars are toy versions of the legendary cars; Janson 88 Special, Hunter Manhattan Spirit, Carson GT Nighthawk, Hunter Cavalry Bootlegger. Another two of the cars that come with the Island are dune buggies that are perfect cars for jumping off the big jumps on the island. Players can also unlock the Hunter Olympus Governor, which is a new version of a previously released online-only car, the Olympus. By getting 100% in the island, players unlock the Carson Annihilator Street Rod, which is an incredibly fast car when boosting. The ninth and final car included in this pack is the Diamond P12, which only unlocks if players complete all 500 online challenges.

The Cagney update also added classical music into the game.

Burnout Paradise requires 3.4 GB of space to install on an Xbox 360 HDD. When installed, the initial load-time of the game is approximately 8 seconds shorter. 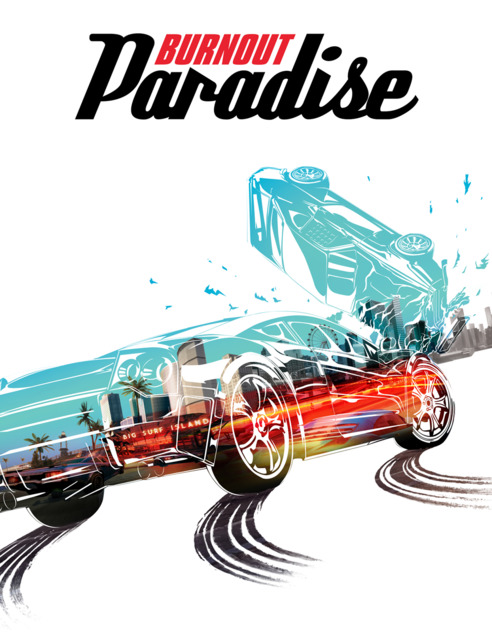