Coffee Crisis is a new retro game for the Sega Genesis that is is also getting a full scale PC release. It is a side scrolling beat 'em up that pits baristas from a heavy metal-themed coffee shop against an alien invasion.

The Smurglian race has watched mankind for years, and deduced that it has three worthwhile accomplishments: wifi, heavy metal, and coffee. Now, they plan on taking these precious resources by invading and brain washing Earth's inhabitants. Nick and Ashley, baristas from the Black Forge Coffee House, must enter the fray and stop the alien threat. 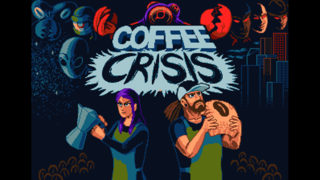