A semi-sequel to Donkey Kong 3, using different play mechanics and a completely new set of levels.

Donkey Kong 3: Dai Gyakushuu is one of several licensed Nintendo games that Hudson published on Japanese computer systems; some were simply ports of pre-existing games, while others used the same spriteset and general structure to create a new title. DK3: DG is one of the latter. The game disallows jumping, as well as the necessity to protect plants, making it much more of a traditional shooter than the original Donkey Kong 3. It features 20 levels, and then loops at the 21st go. The levels have backgrounds that spans various locales on earth before reaching space and an alien planet. 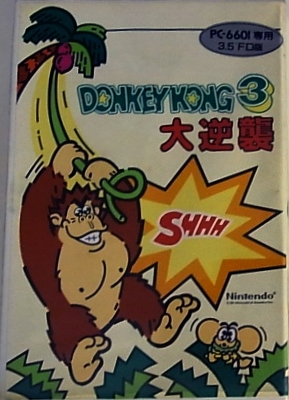