Using controls which look like that of a cockpit, the player controls the jet by joystick handle and aims rockets to intercept target areas such as fuel dumps, missile sites, island fortresses and air strips in a night mission. Pushing the firing button fires the rocket. When a target is hit, the rocket explodes and score (5 points per hit) is indicated. Ground impact explosions are marked by light and sound effects.

The cockpit controls move the player aircraft around the 3D landscape displayed on a screen and shoot missiles onto targets that explode when hit.

Sega Production and Engineering Department, led by Hisashi Suzuki, developed Jet Rocket in the late 1960s. Soon after its American release in 1970, it was cloned by three Chicago manufacturers. This negatively affected the game's performance in America, and temporarily put a halt to Sega's export business, before recovering later.

It featured shooting and flight movement in a 3D environment from a first-person perspective, like first-person vehicle combat video games such as Battlezone (1980) and Hovertank 3D (1991). This makes Jet Rocket the earliest first-person shooter (FPS), predating 1974 computer games Maze War and Spasim.

The game had free-roaming flight movement over an open-ended 3D landscape, for the first time in an electronic game, with players able to fly around and shoot at various landmarks across the game world. This makes it the first open world game. 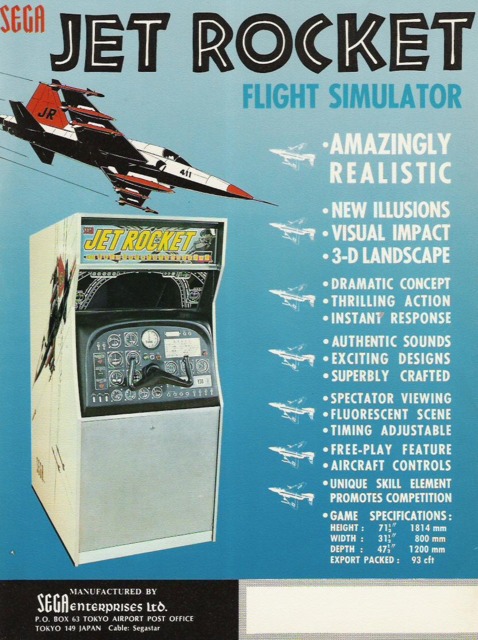