A fantasy-themed strategy game released late for the Super Famicom through the Nintendo Power cart-writing service.

Genjuu Ryodan ("Phantom Beast Brigade") is a strategy game for the Super Famicom that was released exclusively on the Nintendo Power cart-writing service. It concerns the land of Vulcandra, which surrounds an enormous volcano in the center of the continent. After the antagonistic demon Skullkaiser escapes from the volcano with his hellish minions, the militaristic Belnorg Empire decides to use the chaos to subjugate the other Kingdoms into subservience against this threat. The player controls the peaceful Kingdom of Earthring, which is on the edge of total defeat when the game begins.

The game takes its influence from military strategy games like Super Famicom Wars and Military Madness, in that the acquisition of resources is paramount. By taking over crystals on the map, the player earns mana which they can spend on summoning new units. Each unit begins with a strength rating of ten that wears down after battles, but can be restored before the unit is destroyed completely. The player acquires new unit types after each mission, usually after facing them from the opposing side, and completed missions can also be played in the two-player mode. 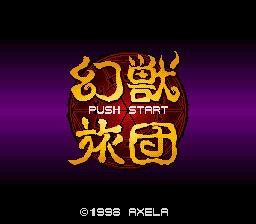