A 16-bit graphically remastered compilation of the first three Wizardry games that was made available via the Super Famicom's Nintendo Power service.

Wizardry I-II-III: Story of Llylgamyn is a compilation of first-person RPGs for the Super Famicom. The compilation includes graphical remasters of Wizardry: Proving Grounds of the Mad Overlord, Wizardry II: The Knight of Diamonds and Wizardry III: Legacy of Llylgamyn, the first three games of Sir-Tech's Wizardry CRPG series. The player can import their winning characters from game to game.

The game originally came with English and Japanese language options, even though the game was never released outside of Japan. The English language option doesn't translate everything, however, and so a localization patch from the Aeon Genesis translation group was released to translate all the remaining miscellaneous menus. The game itself was only made available through the Nintendo Power cart-writing service. 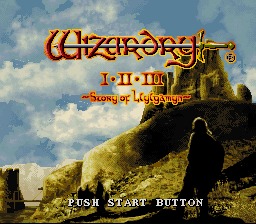