Play as a flying dude holding a large cannon as he takes on giant mechs, flying mushrooms, and fire-breathing dragon skeletons.

Space Harrier (スペースハリアー Supēsu Hariā) is a third-person rail shooter game. It was developed by Sega AM2 and created by legendary developer, Yu Suzuki, responsible for many popular Sega games. The game was published by Sega and originally released in the arcades in October 1985. Since then, the game has been released on a number of platforms and spawned many sequels.

Using Sega's Super Scaler 16-bit graphics technology, the game produced pseudo-3D sprite-scaling at high frame rates, with the ability to scale as many as 32,000 sprites and fill a moving landscape with them, along with 6144 colors on screen out of a 98,304 color palette (15-bit RGB high color depth with shadow & highlight).

It also introduced a true analog flight stick for movement, with the ability to register movement in any direction as well as measure the degree of push, which could move the player character at different speeds depending on how far the stick is pushed in a certain direction. It also introduced a motion-based, hydraulic cockpit arcade cabinet, which moved in the direction the player moved the joystick. The game was also an early example of a third-person shooter; it was influenced by the earlier 1982 Sega game Buck Rogers: Planet of Zoom, and Space Harrier in turn influenced later 3D shooters such as Nintendo's Star Fox (Starwing) in 1993.

Running on the Sega Space Harrier arcade system board previously used by Hang-On, the pseudo-3D sprite/tile scaling in the game was handled in a similar manner to textures in later texture-mapped polygonal 3D games of the 1990s. Yu Suzuki stated that his "designs were always 3D from the beginning. All the calculations in the system were 3D, even from Hang-On. I calculated the position, scale, and zoom rate in 3D and converted it backwards to 2D. So I was always thinking in 3D."[1] The game's success established Suzuki as the leading arcade game designer at the time.[2]

Space Harrier later saw ports to many home game systems.Space Harrier's release on the Sega Master System home console is particularly notable, as there were two versions: one was a port of the arcade game, while the other, entitled Space Harrier 3-D (1988), supported the SegaScope stereoscopic 3D glasses. The game also spawned the sequel Space Harrier II (1988) and the spin-off Planet Harriers (2000).

The game takes place in a unique place called the "Fantasy Zone" (no deeper plot is associated with Space Harrier). The Fantasy zone is a place filled with many strange creatures like one-eyed mammoths, alien pods, strange looking dragons, robots and flying mushrooms etc. The main character is a man with a giant gun/rocket that allows him to fly around. He runs along in a pseudo 3D level blasting anything that comes at him.

The game has the player moving forward at all times and many enemies will get in the player's way, blasting projectiles and moving along in a certain pattern. The player must also do his or her best to move out of harm's way while shooting at anything that's presented on screen. Most objects are destructible, but some are not. If the player gets hit once, he or she will lose a life. The player starts off with two lives, and an extra life can be gained if the player racks up 5,000,000 points.

There are eighteen stages in the game and a boss fight is presented in the end of sixteen of the stages. Two of the stages, stage 5 and stage 12, are bonus levels. The main character will jump on a dragon-like creature and destroy as many objects - trees, stone poles and bushes - as he or she can.

There were several different arcade cabinets. The first two were the standard upright and sit-down cabinets, which introduced the use of an analog flight stick that, for the first time, detected movement in 360 directions as well as the degree of push. The first port to feature similar analog stick controls was the version that appeared in Shenmue for the Dreamcast in 1999.

The third was a new type of deluxe cabinet: the "rolling" cabinet. The "rolling" type moved the entire cabinet in the direction the player moved the analog flight stick, left/right and forward/backward, simulating flight movement for the first time in an arcade cabinet. The first port to simulate the rolling type deluxe arcade cabinet was Space Harrier 3D, which utilized the Nintendo 3DS's gyroscope motion sensor, in 2012.

The arcade hardware used to run the game is widely known as the Sega Space Harrier system, or less commonly known as the Sega Hang-On system. It utilized two boards: the CPU (Central Processing Unit) mother board, and the Super Scaler graphics board which handled the game's complex sprite-scaling. The game displayed 128 sprites per frame, at 60 frames per second, scaling 7680 sprites per second. The graphics board itself is capable of scaling up to 32,000 sprites per second with more memory, as was the case with later Super Scaler titles.

The game was ported to several Sega consoles, such as the Sega 32X, and Sega Saturn. It also found its way to numerous computers and consoles of its era, often with various compromises in quality. The 32X version is one of the earliest ports to match quality with the arcade game, though even it cuts a couple of corners here and there. The Saturn version, released in Japan as "Sega Ages: Space Harrier" is also a pretty faithful version of the game. This version of the game also appeared in the US with two other games on a compilation disc simply called Sega Ages.

A polygonal remake of the game was made as part of Sega's Sega Ages series in Japan. The polygonal version of Space Harrier was released outside of Japan in the form of Sega Classics Collection.

The arcade game was well received upon release. It became one of 1986's chart hits in the arcades. Computer and Video Games magazine reviewed the arcade game in its March 1986 issue, after reviewer Clare Edgeley played it at the 1986 ATEI (Amusement Trades Exhibition International) show in London, along with the arcade version of Super Mario Bros. She stated, "Perhaps the games to steal the show were" Space Harrier along with Shrike Avenger (1986), praising their hydraulic cockpit cabinets that "twist, turn and move" in the same direction as the joystick, making them "the most realistic" simulators "to date". She praised Space Harrier's "excellent graphics" for being "all in 3D with amazing technicolour landscapes" and a "multitude of objects" on screen, as well as "the sounds of the battle" output by "large speakers" where "you could almost lose touch with reality". She also praised the gameplay for being "exciting" and "very fast" paced, as well as the continue feature, but stated the game can be "very difficult."

Clare Edgeley gave the arcade game a retrospective review in the February 1987 issue of Sinclair User, where she noted it had one of the first hydraulic arcade cabinets she had seen, along with 1986's Shrike Avenger. She stated that Space Harrier's "fabulously colourful 3D graphics" and "the movement of the sit-in cabinet were, and still are, breathtaking", noting "the seat-belt" and "turbulent" ride which "hurls you up, down, left and right" and tilts "the cabinet in a roll in whatever direction you push your joystick", concluding the game to be "great fun."

The home conversions were also well received. The game was runner-up in the category of Game of the Year at the 1986 Golden Joystick Awards.

The Milwaukee Journal in May 1987 gave the Master System version a positive review, rating it a score of 9 out of 10. The reviewer Edward J. Semrad described the Master System version of Space Harrier as "the latest innovation" and "the most powerful cartridge ever made for any computer or game system." He concluded it "sets new standards in audio, graphic detail, memory and price ($40 list)."

The September 1988 issue of Computer Gaming World (page 50) called Space Harrier "the best arcade shoot-'em-up of the year ... as exciting a game as this reviewer has ever played". 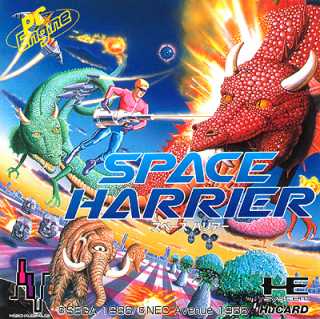