The Adventure Pals is a colorful platforming indie action adventure with RPG elements about a kid, their pet rock, their bestie (who happens to be a helicopter-tongued, rideable giraffe named Sparkles), and their quest to save the world from a man out to destroy old people and friendship.

The Adventure Pals is an action platform adventure from indie developers Massive Monster, publishing by Armor Games Studios. The game follows a young child out to rescue their father, with the help of their pet rock, and best friend; a giraffe named Sparkles. They must journey through a colorful world filled with strange characters and fight bizarre bosses in an adventure with a very surreal and silly sense of humor. The game is inspired by classics like Banjo Kazooie and Zelda II: The Adventure of Link, with influences from Adventure Time and Saturday morning cartoons. The game features local co-op multiplayer as an option. It is available on PC/Mac, Nintendo Switch, PlayStation 4, Amazon Luna, and Xbox One.

As the game opens, the player discovers that it is their birthday, and their father has a surprise planned. That turns out to be Sparkles, a strange and magical giraffe, who the player immediately becomes best friends forever with. Their father also tells them that they have something very important to tell them, but before he can, he's kidnapped by the eccentric evil genius, Mr. B. Thus, the player sets out to rescue their father, but quickly discovers that they may end up saving the world as well. They will travel through locations ranging from a post-apocalyptic wasteland where dinosaurs fight a war against toast, and the lost underwater realm of Crablantis, helping people along the way.

The Adventure Pals is a blend of platforming, monster fighting, and RPG elements. In levels, which are broken up into several sub-stages each, the goal is to reach the well at the end of each area. The player has a health bar, and an experience bar, the latter of which is increased by defeating enemies. Upon leveling up, they may choose from one of several useful power-ups, such as a magnet to pull in coins, a bigger backpack, and more.

The player fights with a sword, though they can also use Sparkles to grab onto enemies and yank themselves over, or toss around bombs. If their health runs out, they will be forced to start the area over, though they can find health potions and more in chests to heal. One of the potential level-up perks to select is a ghostly backpack that will allow players the chance to recover any lost coins and experience if they died before completing a level. Most levels are filled with platforming that involves finding and flipping switches to open new ways forward, or using Sparkles' helicopter-like tongue to help them glide to distant platforms.

There are five main worlds or areas in The Adventure Pals, each with their own unique levels, towns, and challenges. Often, the player's goal in each new area they encounter is to gather a number of giant rubies to complete their main task, usually by completing the quests offered by NPCs in towns. Each main area also has a large boss to defeat before moving on to the next. There are various unlockable costumes and cosmetic changes to be earned by finding cupcakes scattered throughout levels, as well as special hidden stickers to fill up the player's sticker book.

The Adventure Pals is a sort of sequel/remake/remaster of Super Adventure Pals, a free Flash action-RPG created by Massive Monster's Jay Armstrong and Julian Wilton. While it featured some of the same characters and similar gameplay, it was much smaller in scope. The Adventure Pals was successfully Greenlit for Steam in June of 2015, and successfully Kickstarted in August 2016. 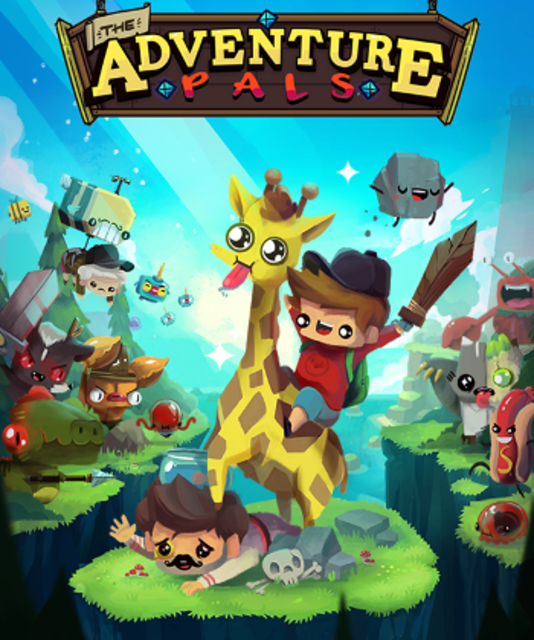